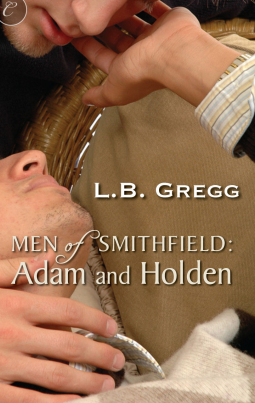 “Fear is that little darkroom where negatives are developed.” – Michael Pritchard

Holden Worthington wasn’t always stricken by panic attacks; at one time he was a world traveler who chronicled his global experiences in the books he wrote to make his living. But that was before his ex-lover betrayed him in front of Geraldo Rivera and all the general Geraldo-viewing population. Now, to a large segment of the Smithfield population, Holden’s just a hermitic, gay porn writing pariah, so he keeps himself to himself not by choice but by circumstance and fear. That is, until Adam Morgan enters the picture and suddenly makes Holden want to do things he hasn’t done or wanted to do for a very long time.

My first impression of Men of Smithfield: Adam and Holden was that it felt very claustrophobic. Odd, no? Well, yes, but it also sort of makes sense, and here’s why. This installment of the Smithfield series takes place almost entirely inside Holden’s house, because Holden is agoraphobic, you see, and his home is not only his sanctuary but his sanity, as well, which is why the story felt so close and crowded—the reader is wedged into a confined setting that’s helped along entirely by the tight prose of the author, who takes a man who panics at the mere idea of stepping across the threshold of his home, even to go only as far as his own backyard, and throws him a houseful of people to contend with, as well as a dead body that’s discovered behind his gardening shed; a body that’s discovered by Adam, a young man with a past and a disability, who is now Holden’s gardener…and his biggest temptation.

Did the gardener do it? Before that question can be answered, the cops have to figure out who the body is…was, and Holden also has to prove who it wasn’t, then prove he himself is not only innocent of murder but is also incapable of having committed the crime in spite of some very recent and inconvenient evidence to the contrary. And he has to do this all while dealing with an ex-lover, a philandering drunk of a brother, a soon-to-be ex-sister-in-law, a nosy priest, and a stern but loyal housekeeper. It’s enough to make anyone crazy.

Men of Smithfield: Adam and Holden does what this series has done so well from the beginning, with its intriguing little mystery paralleling the budding romance between two men who probably shouldn’t work, but somehow they do. These are not perfect men in a perfect world; they’re men who’re just a little bit broken but together shore each other up and make any- and everything a perfect possibility.

I just wish I knew there were more to come.

3 thoughts on “Men of Smithfield: Adam and Holden by L.B. Gregg”