My first GayRomLit…the first GRL ever! And it was in New Orleans, a city I’d never visited before! I might have been bouncing off the walls in excitement. Just a little. Okay, maybe a lot, but don’t tell anyone. I had no idea what to expect! Would I be sitting like a lump in the corner with no one to talk to? Would I have as much in common with this big group of strangers as I seemed to have online?

True confession time. There were two authors in particular who I was both excited and terrified to meet. I had this moment where I thought I’d come off like a bumbling idiot. *whistles innocently* Who me? The first was the lovely Carol Lynne. 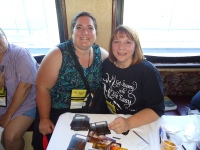 Now come on: it’s Carol Lynne! She’s like…FAMOUS! I was twelve shades of green meeting this woman. Not going to lie. But you know what? Carol was so lovely and sweet that she didn’t even seem to mind me bumbling all over her and asking for her autograph! I also have another special memory of Carol from GRL 2011, one she probably doesn’t even remember, but something that will be with me forever.

See, I had something extra special happen in New Orleans. In August, I’d submitted my first novel, Mind Magic, to Dreamspinner press. Right after the Riverboat Autograph signing, I returned to the hotel and checked my email…only to find my very first contract! Yeah. I cried like a big old baby! (Just ask Xara Xanakas…I called her to my hotel room so I could cry all over her! )

Later that evening, I was heading to an event and passed Carol. She said “Congratulations, Poppy!” One, Carol Lynne remembered my name. Two, Carol Lynne knew I had a book coming out. I have no idea why that memory holds such a special place in my heart, but I think it shows the love and support of the GRL community. We’re definitely one big family, and Carol proved that to me.

The second author I was a nervous wreck to meet was none other than Geoffrey Knight.

Gotta tell you, I was too nervous to ask him for his autograph. Yes, I’m that big of a goober. I own it. I even brought a paperback copy of Riddle of the Sands for him to sign for me…and was too nervous to ask him to sign it. Funny thing about that? Geoff and I are friends now. And take a look at this picture…foreshadowing of things to come? Geoff and Ethan, who are now owners of Wilde City Press, and me, one of their authors!

There were so many other people who made an impression on me that trip. I became good friends with the gals from Mantastic Fiction (waves to Amy, Lynn, and Dolorianne!) and those friendships continue today. I met the peeps from my writing group and I can’t tell you how special that was! Special shout outs to M.J. O’Shea, L.C. Chase, Piper Vaughn, Taylor Donovan, and of course, Xara Xanakas!

Fast forward to October of 2012: GRL in Albuquerque, New Mexico! Another city I’d never visited. (GRL is certainly broadening my traveling horizons!) After New Orleans, I found that I wasn’t as nervous about Albuquerque. There were still a lot of folks I was excited to meet though. It’s funny how friendships form over the internet and then solidify at these events. Case in point, hanging out with Lara Brukz, Ethan Stone, Daniel Kaine, and Monika! We all had a blast and tried not to get into too much trouble. 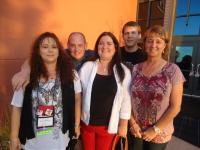 Oh and then there was the delightful Jacob Flores who I’ve gotten to be such good friends with! It was so fun getting to hug the stuffing out of him and seeing that amazing smile in person!

Now, in case you think there weren’t fangirl squees in Albuquerque, I’ll share my picture with Eric Arvin and T.J. Klune. So, I might possibly be a rabid Eric Arvin fangirl. I might have made a slight ass out of myself when I met him. Yeah. I do that. What can I say? He’s awesome sauce.

So what am I looking forward to this year? Meeting new friends, of course. I’ve placed a target on Rhys Ford, as I didn’t get to meet her last year and she needs a hug. Okay, well, she might not need a hug but I need to hug her. Whatever. Semantics. Don’t mess with my fangirl logic, okay?

Then there’s the lovely and delightful Lisa, from this very blog. How did I not get to meet Lisa last year? How, I ask you? HOW??? But Lisa, sweets, you’re getting a big old hug too! (To this I answer, “I dunno!” ::wibbles:: But, oh, you will be properly smished, ma’am!) Oh and Marilyn Blimes, look out because you’re getting tacklehugged too. Oh yeah you are!

I’m also looking forward to drooling on *ahem* I mean meeting Charlie Harding, my new cover model for Accidental Alpha, who will be hosting an event at GRL and yeah… I’m going to drool. I can’t help it.

Now you may be wondering why I’ve rambled on about GRL’s past. Really it’s because there may be one or two of you who are newbies this year and as nervous as I was prior to New Orleans. Don’t be. Well, okay, that might be easier said than done, but I promise you’re going to have a blast! And if you’re nervous, well, to slightly butcher a line from Steel Magnolias: Come sit by me! I promise I won’t bite (don’t believe anything Daniel Kaine says about that…)

A sassy southern lady, Poppy Dennison developed an obsession with things that go bump in the night in her early years after a barn door flew off its hinges and nearly squashed her. Convinced it was a ghost trying to get her attention, she started looking for other strange and mysterious happenings around her. Not satisfied with what she found, Poppy has traveled to Greece, Malaysia and England to find inspiration for the burly bears and silver foxes that melt her butter. Her love of paranormal continues to flourish nearly thirty years later, and she writes steamy love stories about the very things that used to keep her up all night. If her childhood ghost is lucky, maybe one day she’ll give him his own happily ever after.

36 thoughts on “Oh, Poppy Dennison, She Is A Special Flower And She’s Brought Goodies!”