The entire world, or the Chez Singer section of it, comes to a screeching halt in late June and early July, because the Tour de France is on. When each stage can take hours to air, even in the condensed cable TV version, and then the Marital Unit needs to watch it all over again when it repeats, I end up watching a lot of cycling. Then we have the Tour of California and the Tour of Utah, and let’s see, the US Pro Cycling Tour, which has him driving all over Colorado to follow the stages, and… 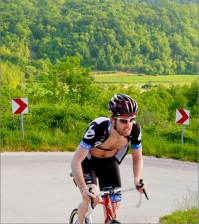 So my response to a TV screen full of guys in skin-tight spandex, not all of it zipped, is to evolve plot bunnies. Heh, heh, heh.

I’ve been working on Spokes a lot longer than I wished, not because I don’t have the plot worked out, but because five Mountain novels had contracts and I do, by golly, meet my deadlines. Linear girl also has issues working on more than one project at a time, but when Team Sky, Astana, Garmin-Sharp and all the others have their 200 riders pedaling through my living room, the creative juices do flow. I’m taking notes, I’m writing a chapter, I’m asking for explanations.

(Honey, why do 153 riders all have the same time for the stage?)

There’s a lot about cycling that’s not intuitive, though it certainly seems straightforward: get on the bike, go fast. I bet Bradley Wiggins and Cadel Evans wish that’s all it took. I had to learn the details, organize them, and pick out the bits that need to make it into the story.

I found very little about gay pro cyclists: Graeme Obree didn’t come out until 2011, after he retired, and even he suggested that other gay cyclists remain quiet lest it cause problems in the changing rooms. Yet I find it hard to believe that there aren’t gay cyclists at every level, including the topmost echelons, on the teams who stand on the podium at the Tour, the Giro d’Italia, or the Vuelta de Espana.

Those last two are big stage races, every bit as important as their better-known French equivalent. In all three, thousands of people turn out to line the routes, to cheer their favorites (or everyone who comes by), ring their cowbells and dress peculiarly, the better to be seen running alongside the cyclists, and scrawl the leaders’ names on the pavement in chalk. I chose to set my story against the late-winter-into-spring time of training and early races, and include the big stage race that falls first in the season.

I invented another UCI ProTeam, Antano-Clark, and based it out of Boulder, where they have to share the off-season roads with Team Garmin-Cervelo. Given how things have changed since I started writing, that team is now Garmin-Sharp. Sponsors change and are hard to come by: fielding a world class team takes many millions of dollars a year, and cyclists can run out of logo-space on their clothing for all the smaller sponsors who chip in. (Team Liquigas put its logo across the riders’ butts for great visibility. Don’t know how Bobke kept a straight face the year the announcers pronounced it correctly, which isn’t “likwi-gas.”)

Team Antano-Clark has Julien Biondi as its star, and Julien has his secret, not to mention some issues with the rider who should be his lieutenant and biggest supporter. He also has eyes for Christopher Nye, an amateur cyclist and would-be journalist, whom he meets at a cycling store. Between the social hazards, the riding hazards, and Julien’s need to leave for Europe, this relationship needs to be in heavy training.

The author is doing some heavy lifting—this is a real sport with real competitors, and I don’t have authorization to use a one of them, so everyone but the MCs are composites with some big old inventions added.

I do make my guys work for their HEA, and I am working to give it to them. The big question—will I have this ready for Gay Rom Lit?

Heh, Linear Girl meets her deadlines. I’m off to write!

Pro cyclist Julien Biondi has fought his way from lowly domestique to the general classification star of Team Antano-Clark without ever poking his nose out of the closet. Being on an American-based team has given him the courage to take a chance on Christopher Nye, a journalist and amateur cyclist. A relationship is harder than any twenty-one stages of the Giro d’Italia–can Julien and Christopher finish this together?

20 thoughts on “P.D. Singer Is Here To Pedal Some Goodies To Celebrate GRL!”