“’Tis said of love that it sometimes goes, sometimes flies; runs with one, walks gravely with another; turns a third into ice, and sets a fourth in a flame: it wounds one, another it kills: like lightning it begins and ends in the same moment: it makes that fort yield at night which it besieged but in the morning; for there is no force able to resist it.” – Miguel de Cervantes 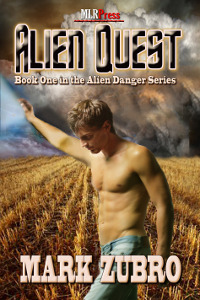 Science Fiction really isn’t my favorite genre. When I was younger, it was all I read. Then all I read was horror for awhile. Like most people, I go through phases where I read more of one genre than another. Although I must admit that my M/M binge has lasted a few years and shows no signs of waning! Alien Quest is the first sci-fi that I have read in a long time. It is the first M/M sci-fi I have ever read.

Joe is a disgraced alien cop who has come to earth to find an escaped mad scientist who is in possession of technology that would enable him to take over the Earth’s population. The last place he was able to track the lunatic to is the restaurant where Mike is a waiter. He comes in several nights in a row and asks to be seated in Mike’s section. Joe seems like a normal customer, just quiet. He watches Mike’s every move. And he brings his own silverware. Oh, and he offers Mike twenty dollars for a pair of his dirty underwear. Did I say Joe seemed normal? Maybe that was a bit of an misstatement.

Joe doesn’t know how to be a gay human, or any kind of human really, so he takes his cues where he can get them. The dirty underwear one didn’t pan out. Mike did wind up alone with Joe, but underwear had nothing to do with it and to tell you would be a spoiler. The chemistry between them is right there in your face. They are very slow to act on it, though. Joe is snarky and Mike is sarcastic. Makes for funny conversation.

They have quite and adventure hunting down the scientist while the local police and the FBI (working with an informant) are hunting them down. You can imagine what happens between their hearts and bodies during this time. It is a romance novel after all. The backstory about Mike’s first lover and Mike’s rocky relationship with his nephew add depth and dimension to the main plotline.

Alien Quest was actually very funny. Mark Zubro has a great sense of humor. The entire book seemed to me to be tongue-in-cheek. I felt myself smirking a lot while reading it. That said, the writing style just wasn’t for me. Or maybe it was that I didn’t really connect with Mike and Joe. I’m not sure. Either way, it just didn’t quite work for me. It felt like it was slightly out of reach and just the smallest nudge would make it work. I’m not sure. I know this isn’t very reassuring, but it IS honest! I am going to read another of Mark Zubro’s books and see if it was just this book or if he and I just don’t work well together.

You can buy Alien Quest here: