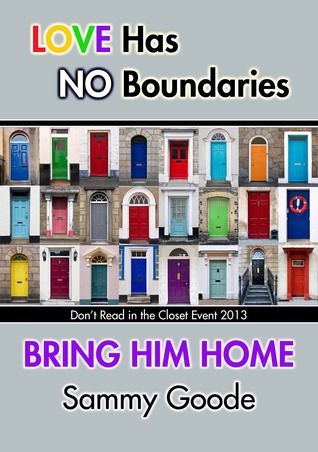 Set against the backdrop of a war in progress, army medic Captain Michael Bradshaw is crushing on the cute and cocky Private Finn McCullan. Unsure if his subordinate feels the same, the two men set about their training, spending increasing time together socially as they await their future assignments. To both men’s surprise, they are deployed to the same destination together, a war-torn area of Iraq where the snipers are plentiful and the danger is high. Their love story unfolds as they fight the dangers of war in a desperate effort to being each other home, safe and sound. But when Finn’s reckless behaviour reaches a fever pitch, even Michael can’t promise their safe passage through the treacherous trials of war.

Written as a submission for the Goodread’s “Love Has No Boundaries” anthology collection, new fiction author Sammy Goode has gone above and beyond with this touching tale of two military medics and their flourishing love in the face of a raging war. It was impossible to ignore the thought and hours of research that went into this small story, each detail relevant and perfectly worded, a task some authors battle when confined within a word count. Though the story spanned months of action, Goode deftly covered the period with a talented combination of hindsight and flashback that catered to all details necessary as she worked toward the required happy ever after.

Michael Bradshaw, military Captain and head of the deployed medic unit was the stories protagonist. He was conscientious and kind, but guarded from the feelings he was experiencing for Finn, erecting a wall around them as both their lives hung in the balance in the face of bombs and bullets. Where Michael was cool and level-headed, Finn was his opposite, impulsive and sudden, his sleep faltering, his concentration wavering. This added such a heart-warming scene to the story that had me in tears as he admitted to his Captain that he was unable to sleep if he was to look out for the man and keep his promise of taking him home safely. My heart strings were well and truly tugged at the love that erupted between the two men.

The sex was hot and flustered, hurried and sensual. The scenes were frequent within the story, but they conveyed a message, they were not wasteful and designed to titillate. Each love encounter was designed to elicit an emotion from the characters, a desperate grab at their time together, so short in the job they had to do. It also rang of secrecy, their love forbidden which just made it that extra bit more emotional and exciting. But there was nothing base about the encounters; they reflected love and passion and possession like no other and it was mesmerising to read.

The action the story took on was intense. Since the word count was short, the main action took place in the tail end of the story, as Finn’s impulsive nature had him defying his senior and hopping on board a helicopter he was not assigned to be on. Then tragedy, perfectly penned by an author who knew just what to say to convey every heart-shattering word the reader needed to feel the wrought climax of the story’s second arc.

My tears came mostly as the story concluded, both men feeling alone and suffering in the after-effects of the gory brutality of serving their country. True to her brief, Sammy Goode delivered a haunting descriptive narrative of the oppressive nature of PTSD and the sacrifices a soldier makes every day when deployed to war, and furthermore, she gift-wrapped it in a bittersweet bow of a happy ending that warmed me from head to toe. It is with great pleasure and a humbling respect that I award this short story a well-deserved five stars (something I don’t do that often). I look forward immensely to further stories from this author, a bold and intricate writer who deservedly sits along-side contemporaries as my own recommendation of “the one to watch”.

You can get a FREE download of Bring Him Home here: