“Another turning point, a fork stuck in the road
Time grabs you by the wrist, directs you where to go
So make the best of this test, and don’t ask why
It’s not a question, but a lesson learned in time…” – Green Day “Good Riddance” 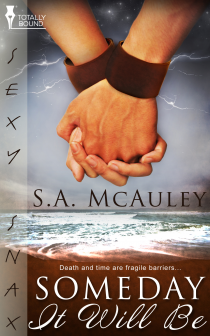 There is a cosmic order to the universe – time is linear, the past is unalterable, death cannot stop true love… at least that’s how all the best fairy tales go. And there’s one more inarguable rule to the order of things in life: for every action there is an equal and opposite reaction – for good there is bad, for joy there is sorrow, for gain there is loss, for fear there is faith, for life there is death.

S.A. McAuley puts all these truths to the test in Someday It Will Be, a gorgeous and lyrical story about cheating fate, and finding trust, and hanging on to the slightest thread of hope, and of sacrificing everything you are to become the one who finally believes he deserved to be loved and to be someone’s beloved all along.

Arthur Conan Poe is offered a rare and precious gift. He is given the gift of redemption, a gift that was freely offered on the heels of a profound sacrifice, the gift to atone for a mistake he’d made as a teenager on the cusp of rushing headlong into a world without hope because he didn’t believe he belonged anywhere else. Artie spent more than a decade attempting to reconcile his decision to run as the only choice he had at the time because he wasn’t worthy of being loved. Or, at least that’s what he thought. His best friend Isaac Knight had very different ideas and spent all those years after that one fateful day to make sure he eventually got the chance to prove that Artie, the man who goes by Poe to everyone but Isaac, is the only one, the only place and peace Isaac needs in a world where he has everything that means nothing if Poe isn’t there to share it with him.

Someday It Will Be is a supernatural love story that has everything to do with exorcising the ghosts of a painful past to clear the way for a different future. It’s a story that folds the hands of time into a fist and grasps at the chance to change things that can’t possibly be changed but are nonetheless. It is a story of two fixed times in an ever evolving paradigm of possibilities – the one that was, the one that is, which will ultimately redirect the course for what will be.

S.A. McAuley has written a full-circle story in which the end is only the beginning. It is a story of a love that is infinite because that love defies the rules of what is and what can be. It is romantic and evocative, heartbreaking and beautiful, filled with the impossible that comes true, and the promise that trust in the power of a soul-deep connection can give a man lifetimes in which to make amends for mistakes.

I love this book, so much so that I’ve read it three times and wished each and every time that it had ended with the promise of a “to be continued…” because in the place where Poe and Isaac exist, the continuation is certain to be one of the best parts.

You can buy Someday It Will Be here:

One thought on ““Someday It Will Be” – For What It’s Worth, It Was Worth All The While”