“I love you without knowing how, or when, or from where. I love you simply, without problems or pride: I love you in this way because I do not know any other way of loving but this, in which there is no I or you, so intimate that your hand upon my chest is my hand, so intimate that when I fall asleep your eyes close.” ― Pablo Neruda 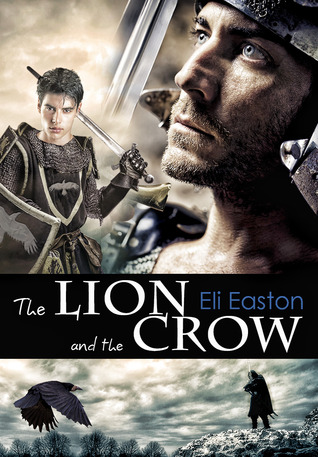 In Medieval England, fearless knight, Sir William Corbit, the Lion, hears news of his sister’s abuse at the hand of her treacherous husband, a union facilitated by the cold scheming of their heartless father. In a desperate bid to liberate his sister from her husband’s tyrannical regime, William visits the castle Brandon to plea with the Lord of the house for assistance. Unwilling to spare the men for the mission, Lord Brandon entrusts his youngest son, Christian, a prized archer, to accompany the knight on his mission. As Christian escapes the abuse of his six half-brothers, he follows William across the land on a mission to save the endangered lady, but what transpires is not what either men expected. As their passion builds to a fever pitch, the Lion and the Crow come to realize that the salvation of the dame is not the only thing at stake. Can their love possibly save the men as well? Honour and valour will take the men to the edges of their darkest hours, and love and trust will light the way for the Lion and the Crow.

Another novella written for the Goodread’s event “Love Has No Boundaries”, I am so honoured to have read this magnificent period piece from a woman who can do no wrong. When offered the chance to read this, I jumped higher than ever before, because from experience, Eli Easton is one author that always delivers the goods. This free story was no different; in fact, it knocked her previous short stories out of pole position as the best one yet. Set in the green and pleasant lands of Medieval Britain, Easton’s narrative adopted a wonderfully dated tone, words picked carefully to reflect the language used at the time of the stories setting. It wasn’t overly complicated, nothing foreign or Shakespearean, just beautifully time-stamped with the hint of yesteryear. It started me in good tread as I began a story that would have me hooked from the start to the beautifully written end.

If you’re a fan of Game of Thrones, then you’ll enjoy this little slice of swords-and-horses drama (in fact, I’ve been toying with puns for this one…Gay of Thrones? Game of Bones? No? Okay). The characters make this story, their deep complex histories paving the way for a connection so epic it had me weeping from start to finish. William Corbit, mature and calculated has a hero’s heart, and is thrown off kilter when forced to ride alongside the youthful Christian Brandon. Corbit’s initial unfounded view of the younger knight is shot to pieces within a few chapters as they start to really see the person beneath the armour, hinting at the men in their true forms outside the walls of their oppressive respective castles. Corbit, all brawn and masculinity is so sensationally developed it felt like reading an old friend, and with a small word count, Easton again provided a complete story that wouldn’t let me go. Christian Brandon on the other hand was a softer character, concerned with coming across feminine after a brutal torture from his half-brothers growing up, particularly the one descending into madness, Malcolm. Eager to escape and prove himself to the older knight, Christian works himself rigorously to be seen as an equal in the other man’s eyes, and it doesn’t take long before the two see more similarities between themselves than differences.

Their journey together towards the castle is so beautifully described it was like stowing away with them, each leg of the trip chronicled in perfect descriptive narrative that brought the scenes to life. As the passion intensified, the sexual energy between the men boiled over. Each chapter was narrated by the two men respectively and thus, we got to read how their lust swelled as the mission went on. This was a perfect literary technique, as reaching the castle separated the men and thus, left them to their own devices, and their reunion was a wonderful account to read.

I have never been a fan of the period drama, never once made a move to look into this kind of story. Boy am I glad I opened my mind for this one. Eli Easton not only gave a convincing, seemingly historically correct story packed full of adventure, but she deftly wove a sensual love story right into the heart of it, and true to genre, gave the reader the sorely anticipated happy ever after. I cannot express quite how wonderful this tale was to read, so I just keep paying it forward, suggesting it to anyone who is a fan of the genre. To not read this book is to miss out, and so, with a flurry of my sword, I grant this story a gallant and well-earned five stars. Best thing about it…totally free! Go grab a copy now and marvel with me as Eli Easton brings the then to us, right now.

You can download a FREE copy of There Lion and the Crow here: