“A great book should leave you with many experiences, and slightly exhausted at the end. You live several lives while reading.” ― William Styron 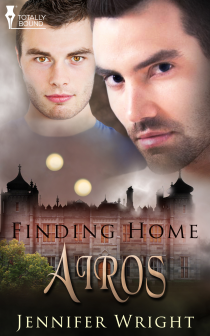 One of the best things about writing reviews for a blog is the opportunity you have to read a book by an author that you may not have noticed otherwise. This is what happened to me a few months ago. An author I hadn’t heard of before, Jennifer Wright, submitted her novel “Pavarus” to the blog for review and I told Lisa, “What the hell, send it to me.” Little did I know I was going to get hooked on yet another series. Like my to-be-read mountain isn’t tall enough, right? The reason I am telling you this is to give you an idea of how much I was totally jonesing for this newest book in the series. In the first two books, we got a look at Zane, one of the MCs of Airos, and his best friend Larken. I told Jennifer on more than a few occasions that I simply could not wait for Zane’s story and I just knew that Zane and Larken were going to live HEA and walk off into the moonlight together. I was just waiting for Jennifer to write their story. Well, she did…….

Zane is the proverbial bad boy. He puts on the tough guy face to everyone except his best friend Larken. You see, Zane is hiding a secret from EVERYONE, including Larken. It turns out that Zane is a half-breed vampire/human. In the Coven, it has always been made clear that half-breeds were not allowed to be warriors, so Zane has kept his secret and takes to visiting his mother under cover of the sun while all of his fellow vampires are sleeping or kept inside. He also created his tough-guy-don’t-mess-with-me persona that keeps everyone at arms’ length. The only person that ever got under the walls Zane put up was Larken.

Larken has been in love with Zane for longer than even he can remember. He keeps hoping that eventually the day will come that Zane will see him as his mate instead of his best friend. Once Zane and Larken finally made love, Larken figured he had finally turned the corner with Zane and they could be together forever as mates, best friends and warriors. When Zane went back to acting just as a friend again, Larken realizes he has to be patient and he is willing to do that, right up until the moment a small dragon made his way to the Coven and turned everyone’s worlds upside down.

Boek was kidnapped and brought to the coven for questioning about the location of Gravaick’s castle. Unfortunately he has no information to give, but he did find a connection with a scarred vampire that has a nasty disposition. It seems these two just connect with a glance and Boek ends up in Zane’s bed. As much as Boek wants to get closer to Zane, it seems it is an uphill battle because Zane is trying to keep them apart. Boek hopes that Zane will get over it soon because little does Zane know, but these two are fated mates and the bonding process has already started.

Once Larken sees the obvious connection between Zane and Boek, he decides that the waiting game is no longer an option. He decides to put all his cards on the table and tell Zane how much he loves him. Of course ,Boek witnesses the confession and the subsequent kiss Zane and Larken share, and he believes that he has lost Zane. Zane on the other hand is completely confused and doesn’t know which way to turn. Right in the middle of having to choose between the dragon and his best friend, Gravaick strikes and one of Zane’s biggest fears is realized.

Zane is caught between a rock and a hard place. He has to sort his feelings for Larken and Boek, knowing he will break someone’s heart, and he has to fight for the life of the only person that has always been there for him.

After the battle between the Draguns and the Vampires is over, Zane is devastated and feels he has nowhere to turn. In a moment of clarity he is given the answer that was right in front of his face the whole time.

If you are a fan of the series, you have been waiting for this book for a long time, and I believe it was well worth the wait. As much as I was rooting for Zane and Larken in the beginning, I found myself equally rooting for Zane and Boek. I think I would have been happy with either outcome, but the final choice was a good one in my opinion.

Jennifer Wright had me on the edge of my seat and I didn’t relax until I read the final word. I highly recommend this book, but I will warn you, if you don’t read the first two books, a lot of this book won’t make much sense. I love this series and the next books have been set up wonderfully, and I cannot wait to see who is next in line. I certainly hope we will see Gravaick finally get what is coming to him soon.

2 thoughts on “And Now, A Spooktacular Review of Jennifer Wright’s “Airos””