There are such beings as vampires, some of us have evidence that they exist. – Bram Stoker 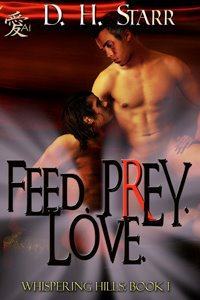 BLURB: At Whispering Hills where mortals and paranormals coexist peacefully – and romantically – love really does bite!

Talib Eldridge is a vampire who lives with guilt. 100 years ago, he accidentally turned a human to a vampire and has been afraid to get close to anyone for fear of ever losing control as he once did. When he meets Conley Berillo, his commitment to living in isolation is challenged. Immediately drawn to the human, he can’t help but fall in love.

Conley has always felt out of place. Never fitting in with others, he too has lived in isolation. When the existence of paranormal creatures is finally acknowledged, he feels an immediate affinity to the outcasts, still feared and hated by humans. Moving to Whispering Hills in Providence, Rhode Island, he knows immediately that he belongs to this new world. When he meets Talib, that conviction is only solidified.

When Jonah Townsend, the human Talib had turned about a hundred years earlier, re-enters the picture, Talib and Conley’s newfound happiness is threatened. Conley becomes the tool that Jonah uses to get back at Talib and Talib is forced to make a choice. Fight for his own happiness and risk Conley’s life, or put Conley’s safety first and sacrifice what he’s searched and struggled for over two hundred years!

REVIEW: I am going to start out by saying I loved the universe this story is set in. I loved the idea of humans and supes living side by side. D.H. Starr did a wonderful job of world building and explaining just enough about the vampires in his world to help us understand the goings-on in this story. The two MCs of the story, Talib and Conley, couldn’t be more different from one another if they tried. Talib is a vampire that has lived well over two hundred years, and Conley is a human. The funny thing is, these two feel like they are made for one another from the moment they meet. Unfortunately, a mistake Talib made over one hundred years before holds him back. He has basically cut himself off from life to keep himself in check so he doesn’t make the same mistake again. As it turns out, all he needs to bring him out of his self-isolation is a yenta of an Elf and a human who is everything Talib has ever wanted in a companion.

Talib is drawn out of his shell kicking and screaming by the purity of Conley’s heart, and he finds himself starting to fall in love and trying to forgive himself for his past sins. Sadly, as he finally gives in to his heart, his past comes back to visit and it comes with a vengeance.

When his only choice is to give up the love he has found with Conley or watch Conley die, there really is only one choice to be made. It will take a brave choice made by the least likely individual to ensure a happy ending for our MCs, and the strength and sacrifice in this decision was amazing.

I have to say that watching Talib beat himself up over a mistake he made a century before was heartbreaking, but as we all know, the love of a great partner can help to heal even the worst scars we carry. The message I got from this story was one of forgiveness and selfless love. The author left a great opening for a sequel, and I will be first in line if he writes it.

Highly recommend this book and the other books written by this author.