Thank you, Lisa and The Novel Approach, for the opportunity to share one of my favorite books, Smuggler’s Cove – Knight of Pleasure. I love all of my characters and enjoy telling their stories, even the difficult ones, but some touch me more than others. In the case of Knight of Pleasure, it’s Ethan and Dean, specifically, Dean. I know several real-life Deans. Men and women who have come back from the wars in Iraq and Afghanistan changed so completely by their experiences that sometimes simple things have become monumental obstacles. As we enter the holiday season and we see our friends and family, it’s easy to forget that not everyone is as lucky as we are. Most service personnel are not able to be with their friends and family for the holidays; for many it’s temporary, but for some they will never return and those who are left behind are left to find their way without them.

As I reconnect with one of my first releases and celebrate a new upcoming release, I’m happy to give away ANY TWO books of mine to one lucky winner. Thank you and I hope you enjoy your time with Ethan and Dean as much as I do.

Note: THIS CONTEST IS NOW CLOSED 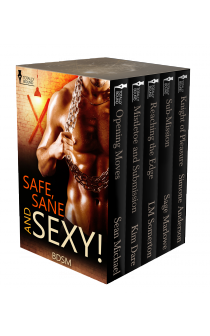 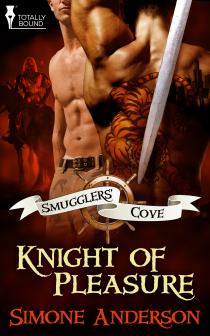 The brewery was started by three friends and continues to grow and prosper.

Wounded in Iraq, Dean Hudson is forced to give up his dream of a career in the Marine Corps. Nearly recovered from the physical wounds that left him scarred, he resigns himself to a life alone, and begins to deal with the emotional and mental scars the war left behind while he tries to rebuild a life. Having kept his homosexuality a secret for so long, he doesn’t expect to find love or acceptance in the arms of a knight.

On the weekends, successful brewery co-owner, Dom Ethan Moreland dons armour and a sword and fights other knights. The adrenaline rush and stress relief provided by the atmosphere of the renaissance faire also serve as a constant reminder of the love he still hasn’t found and can’t remember having.
When Dean meets Ethan dressed as a knight, he never dreams that he will find happiness and love on his knees while submitting to Ethan.

Swords clanged together as two armoured men fought in the centre of a large, roped- off area. Dean Hudson sat in the bleachers with his sister and her three children watching the by-play, his gaze on the knight in the maroon tunic with a dragon painted on it.

“Uncle Dean?” a young voice called out. A small hand tugged on his shirt.

“What is it pumpkin?” he asked, pulling his five-year-old niece onto his lap.

“Is that what you did when you were in the Ma’eenes?” she asked, pointing to the knights.

“No, we weren’t lucky enough to have swords,” he smiled. “They didn’t even give us horses.”

“That’s not nice of them!” she said, hands on her hips, looking indignant.

“Jennie, you’re not supposed to ask Uncle about that,” Dean’s nine-year-old, nephew scolded.

“I’ve never been to a Renaissance Faire before. Besides, it beats staying home and drinking.” Dean shrugged, turned his attention to his niece. “Look, pumpkin, I think that’s the Queen.” He indicated a middle aged woman in a heavily beaded, dark-green velvet gown.

“Queen Isabella Savoy.” Carla wrinkled her nose. “Ethan and Sean call her a fun-hater and a micro-manager.”

“I see. And who again are Ethan and Sean?”

“Ethan’s in the maroon and white tunic with the dragon on it. He’s fighting Lord Darken, Sean, in the green and yellow tunic,” Carla said, pointing to the two combatants before naming the rest of the men in the fight ring.

“Everyone has a different name?” He shook his head. “How do you keep them all straight?” His gaze wandered back to Ethan. Dean had seen him without a helmet on and recognised him from the photographs his sister had sent to him while he was in the desert. Familiar memories tugged at him. Refusing to acknowledge them, he became acutely aware of his surroundings. He hoped the sights and sounds of the faire would keep the memories at bay for a while longer. Now was not the time or place to relive that hell. Smiling, he prayed Carla wouldn’t notice. She deserved to see him happy, deserved a day of fun.

His sister shrugged. “From hanging around them, I know all of the Knights of Steel and a good portion of everyone else here—the ones dressed up anyway. All rennies, the people who do this all of the time, adopt a different name and persona. If you’re observant and patient, you can see scenes unfold just below the surface of the show for the public.”

Dean nodded and shifted uncomfortably in his seat, wanting to bolt. The crowded open area of the faire set his nerves on edge, and he longed for peace and quiet and solitude. Jennie wriggled out of his lap, and he waited for her to climb down to the bench in front of them to join her two brothers before he edged away from Carla.

Dean rubbed his sweating palms on his jeans, thankful the breezy day spared him the awkwardness of explaining why he wasn’t wearing shorts. He hadn’t worn shorts since before his last deployment, when his body and life were changed forever. It was a day like any other, but one he would never forget the day of his last patrol. Two years later, he was looking at an uncertain future as a disabled vet who couldn’t stand on his own two feet without the aid of a cane.

He watched the maroon-clad knight, Ethan, round on his opponent, swing his sword and drive the man to his knees. Kicking him in the chest, he raised his hands in celebration as the man toppled backwards. Half of the crowd cheered. The other half booed. An armour-less man dressed in a black and white tunic bearing the colours and crest of the entertainment troop rushed forward to help the defeated knight to his feet.

One after another, the armoured men dropped to one knee, heads bowed in the direction of a short, round, blonde-haired woman, who despite her smile, looked as though she’d just tasted something disgusting. Ethan stuck his sword into the dirt, removed his helmet then knelt on one knee.

Dean inhaled sharply. Long, light-brown hair was tied at the nape of the man’s neck, and beads of sweat ran down the sides of his face. His angular jaw gave way to the subtle lines hidden beneath armour.

“Ethan’s gay, by the way, and single,” Carla whispered in his ear. “I thought you might like him.”

“You told me in one of the letters you sent me. If I didn’t know better, I’d think you were trying to play matchmaker,” Dean said good-naturedly, hugging his sister.

“Why shouldn’t I want my brother to find true love?”