“Miracles happen on Christmas… Everybody knows that shit.” ― Matthew Quick 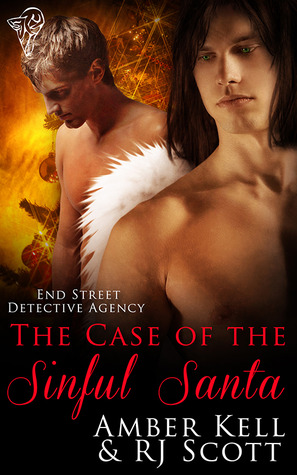 BLURB: Zephariel, the Angel of Vengeance, Nick Klauson, nephew to Santa, Christmas magic, zombies in the school and a necromancer causing chaos…and at the center of it all—Mal.

Zephariel is the Angel of Vengeance and is tracking down his cousin Danjal for misuse of brimstone. When he walks into a bar and finds Nick Klauson drowning his sorrows, he is instantly drawn to him. Could this be his fated mate?

When Nick and Zeph join forces to deal with zombies in Mal’s school, sparks fly. Add in a demon, a wolf and a necromancer, and Sam and Bob have a hunt on their hands.

REVIEW: The last installment of this series ended with Sam and Bob finding out the magical school they had sent their daughter, Mal, to was being overrun with zombies. It seems a very powerful Necromancer has raised some ancient bodies and is hell-bent on taking over the world, one small bit at a time.

This book starts out with Nick Klauson trying to drown his sorrows in a whiskey bottle. It seems he doesn’t fit in with his family, and he is tired of feeling like an outsider. Just when he thinks nothing could go his way, Zaphariel walks into the bar and things definitely start looking up.

Zephariel, or Zeph, feels a strange urge to go into the bar he is walking past, and when he enters he finds out why, almost immediately. When he spots Nick sitting at the bar, Zeph realizes he has to have this man. Just when things start to heat up between the two men, Zeph just disappears. Nick can’t figure out what’s going on, but he doesn’t have much time to dwell on it because he feels a call in the city, and he realizes he has to answer the call and try to fix whatever is wrong.

It seems Nick and Zeph may have more in common than just physical attraction. Both of them were brought to the scene of the zombie rising. Nick is drawn by his ability to feel the despair of other beings and the kids at the school are like a beacon in the night to him. Zeph has been summoned by Bob since he owes the vampire a favor.

The two men are victorious over the zombie hoard, but they have to join forces with Sam, Bob, Dan, and Hunter to find the necromancer responsible for the zombies in the first place.

Along the way, Nick finds out Zeph is his fated mate. This could cause some major problems for Zeph since angels are not supposed to mate with humans. Zeph has a big decision to make: does he keep his fated mate and risk losing his wings, or does he find a way to live without the other half of his soul?

Through all the trials and tribulations thrown in their path, both Zeph and Nick can’t help but fall in love. With the help of their own little band of misfits and a few new friends made along the way they find an answer to their problems.

I love this series by Amber Kell and Rj Scott. Not only are there some pretty cool paranormal beings, but the interaction between them all is very entertaining. There is a great mystery, some hot lovin’ and even a bit of humor. I can’t wait for the next book in this series. Maybe we will FINALLY find out exactly what Sam is.

If you haven’t read this series yet, I highly recommend it.

You can buy The Case of the Sinful Santa (End Street Agency #4) here: