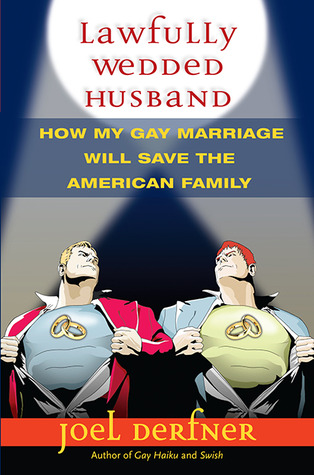 Blurb: When Joel Derfner’s boyfriend proposed to him, there was nowhere in America the two could legally marry. That changed quickly, however, and before long the two were on what they expected to be a rollicking journey to married bliss. What they didn’t realize was that, along the way, they would confront not just the dilemmas every couple faces on the way to the altar—what kind of ceremony would they have? what would they wear? did they have to invite Great Aunt Sophie?—but also questions about what a relationship can and can’t do, the definition of marriage, and, ultimately, what makes a family. Add to the mix a reality show whose director forces them to keep signing and notarizing applications for a wedding license until the cameraman gets a shot she likes; a family marriage history that includes adulterers, arms smugglers, and poisoners; and discussions of civil rights, Sophocles, racism, grammar, and homemade Ouija boards—coupled with Derfner’s gift for getting in his own way—and what results is a story not just of gay marriage and the American family but of what it means to be human.

Review: I haven’t read a memoir for awhile, or anything for that matter that involves some serious deep thinking. Let me begin by saying I thought this one contained some very romantic moments, for instance, the way Mike came up with the idea of hiding a ring amongst Christmas tree ornaments in order to propose on bended knee. Really Joel, you really had to check your horoscope before you gave him your answer. Cute!

I don’t know if this makes me an expert on marriage, but I’m the only one in my family (including parents) who has been married only once, for over 35 years to the same man, and I found some of Joel’s thoughts on the subject of marriage very insightful and touching, especially when he comes up with the meaning of marriage: it means family. I wholeheartedly agree with him on that one. All those who oppose same-sex marriage, and who flaunt their definitions of marriage, they really have no clue as to what a real marriage is or what it entails—legally or morally. I also respected his take on insisting calling gay marriage same-sex, instead. I personally hate it when it’s referred to as an institution. It sounds like someone needs to be committed for considering it. Heck, I thought that was something to consider, with the Reality show! I did enjoy how Mike got you back with that one, Joel. IOWA! Hehe, good one Mike! And I would love to go to a wedding involving exchanging butt plugs instead of rings. That couple was very creative! I wish I’d thought of it at my wedding!

As you can tell, there’s quite a bit of humor involved throughout this memoir. And… I thought my family was sick and twisted. I’m still snickering over the word fertilizer. So, with that in mind, and the fact that someone had the ability to stir up some of that gray matter called my brain, and they reminded me again why I’m still married, I’m giving this one 5 Stars.

I loved your journey leading up to your marriage, Joel and Mike. Now we need to know how you’re fairing as an old married couple.

You can buy Lawfully Wedded Husband: How My Gay Marriage Will Save the American Family here: