“Nothing takes the taste out of peanut butter quite like unrequited love.” – Charlie Brown 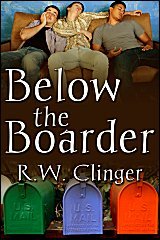 Below The Boarder begins like a stereotypical opposites attracting story. Hot, hunky mechanic Dayton O’Hare moves into college professor Noni Spiro’s attic room and becomes a boarder. The attraction is immediate and the seduction dance begins despite the approximately 20 year age difference. The two men fall into a sort of relationship. It is undefined. Are they lovers? Boyfriends? Tenant and Landlord with benefits? Nino would like a little more clarification of what they are, but Dayton isn’t willing to give it a name.

When Nino has a party, one of the guests is the twenty-something, gorgeously muscular landscaper, Michael Block. Nino finds out soon after that Dayton and Michael are seeing each other behind his back. Then above his head. This shouldn’t hurt like it does, but he had to go fall in love with Dayton. How he stayed in that house, listening to them having sex right above his head, is beyond me.

A couple of things made me cringe about this short book. Insta-love: I know it can really happen, but can it happen when one person is obviously disinterested in emotional entanglements? The stalking: kind of creeped me out a bit that Nino got off on watching his lover have sex with another man. I have read other books where the characters had relationships like this, but it was all consensual and the voyeurism was agreed upon. Then there was the ease with which Nino jumped into bed with Michael when he was supposedly in love with Dayton.

I don’t share partners. I don’t judge people that do, but I have a jealous bone as big as my butt! Let’s agree to call it considerable, shall we? The speed with which the three of them get together was surprising to me. For Nino to be in love with Dayton, then cheat on him, then share him isn’t realistic to me. Maybe he felt like that was the best way to keep him. I’m not sure. Then there was the sex. The recovery period for a man Nino’s age was that of a 20 year old. Lucky him!

There were some funny parts and some warm, caring moments that redeemed this a bit for me and held it to three stars instead of two. But, like so many other shorter books, it depended too heavily on sex and the reader’s ability to suspend disbelief indefinitely instead of story.

You can buy Below the Boarder here: