“Who knows the end? What has risen may sink, and what has sunk may rise. Loathsomeness waits and dreams in the deep, and decay spreads over the tottering cities of men.” ― H.P. Lovecraft 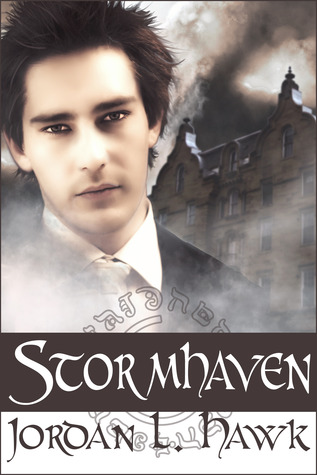 One of the things I’ve come to love about Jordan L. Hawk’s books is that no matter what I expect going into them, by the time I’m finished I’ve learned to appreciate all the unexpected things that manage to come out of them, even if those things raise my blood pressure to dangerously high levels and/or make my hair stand on end.

Stormhaven, the third book in the Whyborne & Griffin series, takes you to all those unexpected places, and then some, because in Widdershins, Massachusetts, any- and everything is possible, especially when there always seems to be someone there who’s hell-bent on summoning something up from the great beyond, or from the unfathomable depths, to take over the world.

There’s a great deal of facing down the past involved for Griffin in this installment of the series, which added a wonderful layer of feeling to the mystery of Stormhaven—a lunatic asylum in which there’s so much more than simple madness afoot, a place where there is indeed a lunatic running the place, a madman bent on vengeance—as well as a healthy measure of relationship drama with both Griffin’s family and especially with Whyborne, as the unanswered question now is how long they can continue to live together as two confirmed bachelors before it becomes suspicious and they begin to fall under the microscope of speculation.

There is an emotional investment the reader can’t help but make in this arc of Whyborne and Griffin’s love story. If the time period in which the series is set doesn’t guarantee it, the fact that these men simply love each other deeply is all it might take to make you fall in love with them.

From the oppressive atmosphere of Stormhaven, to the cloying worry that hung over Whyborne and Griffin as Griffin’s family comes to Widdershins for a visit and have more on their agenda than a simple reunion, to the supernatural danger that sings its Siren’s song and nearly sweeps Whyborne up in its fury, this book was driven by a furious need to keep turning pages to see what would happen next.

There are choices made, some that mean sacrifice, some that mean joy; there are doors closed and some beginning to crack open, if only slightly. Time will tell what Jordan has in store for these men next. Whatever it is, I’m sure it’ll do nothing less than keep us in suspense.