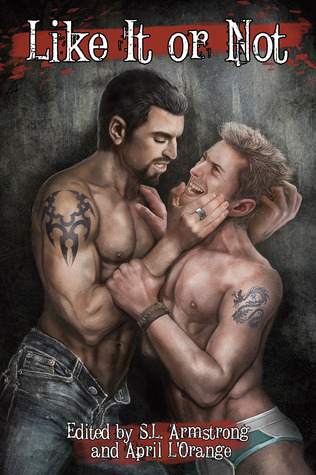 Blurb: Be it forced seduction/dubious consent, non-violent intimidation, or pre-negotiated fantasy, there is something wickedly taboo about non-consensual sex, where consent is muddled. While rape is a crime of power, focusing on exerting physical control over another person, non-con is all about the gray area where verbal consent is either never given (not a ‘yes’, but not a ‘no’ either) or doesn’t match the arousal and passion both parties share during the act. In Like It or Not, we push the boundaries of consent without fully breaking them.

When Connor’s rent money is due and not even hooking can make up the shortfall, he really is Out of Options. So when playboy Jarrett makes him a very generous offer, he doesn’t look too closely at the terms—and lives to regret it.

Then, werewolf Trevor is subjected to Obedience Classes when his pack alpha becomes fed up with his rebellion. Dirk, the wolf charged with this task, though, seems more interested in claiming Trevor for himself, by any means necessary.

Writer Ian Richards has to decide What It’s Worth to get his story when his contact meets him in a private club. In fact, Vincenzo has no intention of letting his information go easily, if at all.

In Blindside, freshman Matt is tired of enduring the hazing by (admittedly gorgeous) upperclassman Dylan, when Dylan ups the ante significantly. And as much as Matt wants Dylan, he can’t be sure the whole thing isn’t one more bizarre prank.

Confessor Isak must resort to Unnatural Means when he is charged with the task of forcing Sain to confess his sins of murder and witchcraft before inevitable execution. Torturing in the name of the Divine is difficult enough, but when Sain’s seductive magic takes hold of him, he isn’t sure it will be Sain who breaks under pressure to find release.

Finally, Salting the Earth becomes Ronan’s only choice when he suspects his sister has been taken by the fairies. However, this only draws the interest of ruthless King Finnbheara, who extracts a price for his cooperation that may be too high for Ronan to pay.

Review: I quickly snatched this anthology up to review. I personally like darker stories, so when I saw this contained non or dubious consent stories, I was all over it. I was also interested to see how each author would handle this theme and in which direction and level they would take it to.

Out of Options by Angela Sparrow and Naomi Brooks

Conner turns tricks when he can’t pay rent. He meets Jarrett this way who at first treats him with kindness and respect he also pays very well. When Conner loses his job he really has no other choice but to turn for Jarrett for help. Signing a contract, which he really should have read in it’s entirety, Conner is about to see Jarrett in a whole new light and there’s no way out.

I have to admit this story took a turn I was not really expecting, I just didn’t see it coming. I give a thumbs up to the authors for blindsiding me, and doing it very well. I was a little taken aback at how violent Jarrett was towards Conner. Floggings, being tied up, ball gagged, this has all the elements of forced submission, so reader beware. I think it would have been an uncomfortable read if Conner fought him 100%, but as the story progressed, he realizes he wants to be there, he’s starting to enjoy submitting to Jarrett. I wouldn’t recommend this story for the faint of heart. This story pushed boundaries that may not sit well with many readers. Overall, I liked the intensity and the dark elements, even though it had me squirming in my seat.

Trevor is a college student who is rebelling against the establishment, being that he’s a werewolf, he must be taught a lesson. The Alpha sends a powerful werewolf named Dirk to teach this young pup how to behave.

I loved how this story played out. Dirk does a little mind playing with Trevor at first to wear him down a little and put a dent in his attitude. With Trevor’s sharp tongue and Dirk’s strength, it was interesting to see the power struggle play out between these two characters. Dirk was a little harsh in his methods he used to get Trevor to submit and I wasn’t really sure how this was going to end. Eventually walls break down and Trevor submits, realizing Dirk is his mate.
Overall, I thought this story was well written and fans of author will no doubt enjoy it.

What It’s Worth by Gryvon

Ian is a grumpy, introverted, anti social reporter/journalist. While researching an immigrant family he interviews an old man who turns out to be a mafia boss. He tells Ian to go talk to his grandson. Ian’s world is about to turn upside down.

This was the least hardcore story of the bunch. It was actually very sweet in its own way and I would would love the author to maybe revisit these characters one day.

College student Matt has had a crush on Dylan for a long time. In his wildest dreams he would never have thought Dylan would come on to him and seduce him. Matt did whatever Dylan told him to do willingly, but also with a little fear, which turned him on. I loved this story. It had the little bit of edginess to it, but also sweet and tender moments too. Dylan was forceful but you got the feeling he really cared for Matt, he even went out of his way to secure an unlikely place for the two of them to get together.
For me the end of this story came way too soon, I just wanted more of Matt and Dylan.

This story is set during the time of witch hunts, with a paranormal, fantasy feel. Isak is a confessor trying to get a confession out of Sain, a man accused of murdering his lover through witchcraft. Isak wants him to repent and is trying to save his soul.

I was a little confused by this one. Isak, for all intents and purpose is a religious man fighting his attraction for Sain. He thinks the witch has put and enchantment on him. Sain on the other hand thinks he’s done nothing wrong and isn’t confessing to anything. There seemed to be a mutual attraction that I just didn’t get. I didn’t feel any connection to the characters at all. Maybe if it was a little longer and had some backstory I would have felt differently. As it stands, it was a totally confusing read for me.

Salting the Earth by Heidi Belleau and Violetta Vane

Ronan fears his sister has been taken by the fae. Finding the means to get to the fairy realm, he is subjected to being a plaything for the fae and their king.

This story almost had a dream like quality to it. As other stories have portrayed, the fae aren’t very nice, this is so true in this story. Using Ronan like the flavor of the month, softening him up for their king, forcing him to submit to their every sexual whim, they were cruel and merciless. I feel as though Ronan was almost enjoying himself after the initial introductions. We got a flashback at what happened to him in the past, so it’s like he welcomed the need to feel needed.

The story was very well written, and the sex was crazy hot. I will definitely be reading more from these two authors.

Overall, I enjoyed most of these stories. I would definitely recommend this to readers who like their stories dark and forceful.