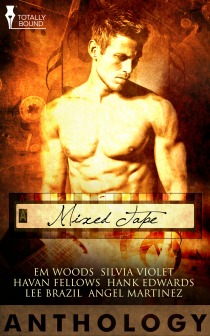 Review: This is kind of new for me. I have reviewed a story from an anthology before, but I haven’t ever tackled a full anthology review. I have always loved reading anthologies, I like that I can read a little short from a few of my fave authors, and sometimes find a new author thrown into the mix. This one was chock full of some of my favorite authors, so that was just a big old bonus :).

Chantilly Lace by Em Woods was the first story, and it was a great little story of a young man, Shea Laporte, who has found a way to support himself without breaking any of his rules. Shea has these rules to keep him safe. The last time he broke these rules, he definitely suffered for it. Enter Murdock “Murk” Rouse, his across the hall neighbor, and Shea realizes that these rules just may be going out the window. When Murk pushes his way into Shea’s neatly ordered life, he not only realizes his first impressions of Shea might have been way off, but he also finds out that his new favorite song may just be Chantilly Lace. Once Shea takes down the walls protecting his heart, he and Murk are on the way to a wonderful HEA.

Rush Around the Clock by Silvia Violet had one of my all time faves in it: two tiny little Yorkies that not only keep Finn McMurphy company but might just lead him to his own big, hot man. Finn has many regrets in his life but the biggest regret may have been disappointing his mother right before she died. Since her death, Finn has taken on her house and her two spoiled Yorkies, Yip and Yap. Finn believes that he has to be a teacher at a great school to honor his mother’s memory. The drawback is the salary isn’t enough to cover his bills, so Finn ends up working way too many side jobs to make ends meet and has very little time for a personal life. Enter Crawford Bixby, an Adonis of a man who makes Finn slow down to smell the roses. When Finn feels like his very carefully structured life is threatening to unravel, he runs from Crawford and all the comfort he offers. It turns out that Yip and Yap help bring Finn back to his senses and maybe back to Crawford’s side.

It’s Only Make Believe by Havan Fellows was a wonderful story about a man who has hidden behind a mask of his own making his entire life. Dyer Cambell is an actor, and he has found the perfect part. The only drawback is the directors are leaning toward hiring only a gay man for the part. Luckily for the very straight Dyer, his best friend has a gay brother. When Dyer proposes his plan of Derrick posing as his lover, Derrick has no intention of just playing along. Derrick has known Dyer since he was a young boy. He believes that Dyer has been hiding his true self for so long that he doesn’t even know himself, not really. When an incident outside a gay bar brings back memories long shut away, memories of desires and abuse, Dyer realizes that maybe he needs to stop playing make believe and start truly living. He only hopes that Derrick will be there to help him.

Walkin’ After Midnight by Hank Edwards is the story of a man who can’t find that forever guy. Floyd Burland has never had a difficult time finding Mr. Right Now. He seems to have a problem finding that Mr. Forever. His serial dating ways have given him a reputation, so when he innocently pays Trevor, a busboy at the bar, a compliment, it is taken wrong and somehow Floyd finds himself “dating” Trevor. Right when this happens, Gavin Hunt steps into the bar and Floyd realizes he has just found what he has been searching for. The only question is how will he get rid of Trevor without hurting the man, and what does he do when he finds out his boss is dating Gavin? This was a funny story. Near the end of the story one character even labels it a “Telenovela” and she couldn’t have been more right. When Floyd finally realizes what he wants and how to get it Gavin has given up on him and taken a job in Nashville. Will Floyd stay in Detroit and lick his wounds, or will he try to get back the magic he shared with Gavin when they went Walkin’ After Midnight?

His Dream Lover by Lee Brazil is one of the more original stories I have read in quite a while. Anesthesiologist Oliver Gideon has spent the last six months trying to make up for what he sees as a mistake made by him. When Joseph Caldwell came in for a surgical procedure, he put all his trust in Oliver and Oliver takes that trust seriously. For some reason Joseph doesn’t wake up after surgery, and six months later he is still in a coma. No one knows why, but Oliver has decided that he will care for Joseph and he will be there when he wakes up. While Oliver is keeping Joseph company, Joseph is visited by Morpheus, King of Dreams. He is welcomed into the dream realm, but Morpheus warns that some dreams are true, but some are false. Joseph has finally found what he has always wanted in this dream: a soul mate, someone to love him. When Oliver has to fight to stay by Joseph’s side, the time has come for Joseph to choose. Does he stay in the dream realm, or does he take a chance at the forever kind of love he has been dreaming about for six months?

The Line by Angel Martinez was a surprise for me. Raphael Schiller has spent a long time at the top of the food chain. As a vampire there isn’t much in this world that scares him. He spends his days and nights chasing after blood and sex, and he is very successful at getting both. It isn’t until he realizes that a predator has entered his territory that he remembers he is vulnerable. When he is confronted with this predator, he remembers folk tales his mother told him about the Krsnik, monsters that feed only on vampire blood. This creature takes a bite out of Raphael and that is when he knows he is in trouble, because he loved it. Raphael starts a game of cat and mouse with the Krsnik, Lan, that ends up with Raphael calling Uncle and giving up the fight. The most confusing part for Raphael is when Lan doesn’t just kill him outright. You see, during their merry game of chase Lan was able to observe Raphael and what he found was a respectful, giving and caring vampire. Nothing like the vampires he has known in the past, Lan is not ready to kill Raphael. When he realizes Lan isn’t going to kill him, Raphael remembers how wonderful the man felt feeding from Raphael’s neck. The two set out to find a way to live together instead of trying to destroy one another. It is only when Raphael is injured that they get their answer, but will it have come in time?

This was a wonderful anthology and I believe each author did a great job of working their song titles into the stories. It is hard to pick a favorite out of this collection, so I am not even going to try. I have read other stories from each author, and I have to say they all brought their “A” games to this collection. I don’t think there was anything I could complain about with this group of stories. They are each wonderful and I highly recommend this anthology. Very well done.