“Only the really insane feel no fear.” – Sam A. McAuley 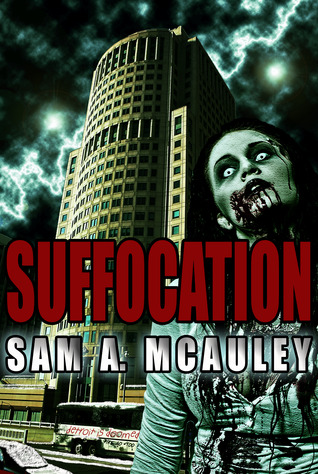 Five years after the electromagnetic pulse that fried every piece of electronic equipment in the United States, Detroit hasn’t changed all that much. Until today. Blaine and his boss Pike have kept their own district running smoothly. But as a warring faction moves in, and bodies start showing up mutilated beyond recognition, it becomes clear that much more frightening things are on their way.

Review: Sam A. McAuley (a.k.a. S.A. McAuley) ventures into a frighteningly good alternate reality in Suffocation, book one in the Breathers series. The author’s portrait of a dystopian Detroit is haunting, as modern conveniences have given way to a more primal instinct to exist as a species, forcing humanity to adapt and recreate a version of civilization that has nothing to do with democracy, one nation indivisible, and everything to do with survival of the fittest; though the fittest, some might argue, are also the most dementedly dangerous. There is something more at play, however, than attempting to rebuild some semblance of order from the chaos left in the wake of the Electro-Magnetic Pulse that brought society to its knees five years before. There is an enemy so alien and so utterly without precedence in the years prior to the chaos that it has begun to change the very composition of the earth’s atmosphere. They are the breathers and they are determined to bring about the extinction of the human race.

The relationships and character interactions in this novel are perfection, capturing the conflict, the pain, the strength and the determination to carry on, and sometimes even the resignation that carrying on may not be in the cards. Though this isn’t an LGBT novel, per se, Grady and Shy are a couple who play a huge role in the success of this story narrated by Ethan Blaine. There is not a smidge of romance in the book either, though the emotional bond between Grady and Shy is so subtextually obvious that with every step they take into the post-apocalyptic, potentially world-ending fray, you can’t help but hope their courage in the face of danger will lead them back to each other, always.

There is no sugar-coating of the realities the lives these people now lead. There is death, not always caused by the zombies but by the compassion of friends who refuse to stand by and watch those they once cared for become the other from which they hope to escape. This led to a particularly poignant moment that lent a sad but emotionally satisfying edge to the plot in spite of the fact the character wasn’t a primary role player in the story.

These walking dead scream in a deliciously frightful way and are so very different from any others zombies I’ve ever before read. I ate them up, word-for-word, and am still left wanting more.

If you love your horror served with a side of action, suspense and a healthy side of doom, give Suffocation a try.

You can buy Suffocation (Breathers #1) here: