So, I’ve just published my first work of romantic fiction, Incendium. A short time ago, this was something I never would’ve thought I’d be saying. I even would have been insulted if you’d told me this was soon going to be the case.

One of the most important things I did as a writer was to join a writing group. This gave me encouragement and support when I needed it, ideas when I was stumped, and kept me from putting some really dumb things on paper. Most importantly, it provided me with deadlines―ones I was actually motivated to meet.

But these stories were more than just their sub-genre, they were Romance novels, and I was just beginning to understand what that meant.

If you’re wondering what these books were that won me over, you should check out Alyssa Cole’s Eagle’s Heart, coming soon from Loose Id, and Katana Collins’s Soul Stripper from Kensington (also her second book in that series, Soul Survivor, which gets even better).

I was hooked by my group’s writing. I couldn’t wait to get the next installments, demanding that my fellow writers hurry up and write faster. Soon, my group began suggesting other Romances for me, and pretty soon, I was converted. Admittedly, I do prefer the genre Romances over the standard ones, but that’s also the case with my non-Romance reading tendencies.

One day, my friend Katana recommended that I try writing a Romance myself. At first, I was like, “What! Me write a Romance? But I have a penis! No way.” She showed me an anthology call from Storm Moon Press, asking for submissions of gay romance stories where one of the two lovers was a dragon in some form. The more she and the rest of my group nagged―ahem, I mean encouraged―me, the more the seed took root.

I started off thinking, “This’ll be easy. I’ll just write a story like I normally would, but with more sex in it.”

Everything from making the sex scenes arousing, to producing engaging emotional description, to writing believable and entertaining dialogue took work to get down. I learned a lot more about Romances trying to write one than I did from reading them.

The most fundamental realization I had was that Romances give us the luxury of waxing grandiloquent about love and attraction. Love makes fools of us. When we’re in its grasp, we act like idiots, and we don’t care. We don’t care if we’re absurd, trite, or melodramatic―we embrace it. That’s the magic of being in love. Romance fiction allows us to revel in this fantastic aspect of our nature, of our humanity.

Yes, other love stories talk about how wonderful love is, but they do not approach it in the same extravagantly delicious way. This genre allows us to explore the things we all love about being in love to an unapologetic degree. 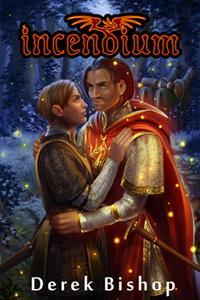 My novella, Incendium, had more of a bittersweet ending rather than a typical HEA. For this reason, it was not accepted for the Dracones anthology. Fortunately for me, Storm Moon liked the tale enough to sign it as a stand-alone work. It’s available right now, so please check it out! Dracones is also available from Store Moon and has a bunch of excellent stories as well.

Incendium is not the last romantic story I plan on writing. Now that I’ve drunk the Kool-Aid, I’ve got several other ideas that are clawing to get out. A couple years ago, I would have been horrified at that prospect. But now, I’ve become an appreciator instead of a criticizer. Warming up to Romance fiction gave me the best story that I’ve ever written, and there’s something to be be said for that.

Thanks for joining us on the Incendium blog tour! Be sure to take part in our giveaway! You have several options to be entered through our Rafflecopter, but you get the most entries by leaving a comment on this post! Today’s question is…

Have you ever been skeptical about a genre but been pleasantly surprised when you tried reading/writing it? If so, what genre?

Derek Bishop grew up in a small Virginia town along the Blue Ridge Mountains. He was raised on Southern Baptism and Star Trek. The Star Trek was the one that stuck. His parents were both teachers and imparted a love of literature and wilderness exploration on him. He went to school at the College of William and Mary in Williamsburg, Virginia where he learned the joys of studying feminist theory, dancing to techno music, and grocery shopping side by side with colonial costumed re-enactors. He left one class short of a Gender Studies major and several classes too far of an English major. His latest work, Incendium, is now available from Storm Moon Press.

3 thoughts on “How I Learned to Stop Worrying & Love the Romance by Derek Bishop – And, There’s A Giveaway!”