“Romance is the glamour which turns the dust of everyday life into a golden haze.” – Amanda Cross 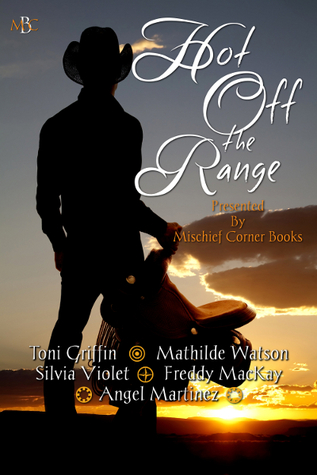 Title: Hot Off the Range

Blurb: Riding and herding. Those spurs that jingle-jangle-jingle. What is it about cowboys that so doggedly fires the imagination? Join the Mischief Corner authors as they give you their own unique takes on the cowboy mystique and mythos, from the American West, to Australia, to outer space. The cowboy story will never be the same…

Review: Once a Cowboy – Toni Griffin

Logan Kennedy loves his land and all the animals that live on it. For the last six years that land has been all he has had. You see, he fell in love with his soul mate at 17 and lost him. After being discovered together in the barn by Jesse Howard’s brother six years before, Logan hasn’t heard from, or seen, Jesse. Logan hasn’t been able to move on, and he doesn’t really want to. He believes Jesse was his soulmate and there just isn’t any replacement for that. When Jesse walks back onto the ranch and back into Logan’s life, he doesn’t know if it is a blessing or not. Jesse hasn’t returned alone, and Logan isn’t sure if he has room in his heart for the entire package that just walked into his life. After hearing what happened six years before, Logan realizes that no matter what Jesse has brought with him, the man will always belong right at his side. The two men will have to fight to stay together, but anything worth having is worth fighting for, and that is exactly what they will have to do.

Toni Griffin did a great job of painting a picture of Logan and Jesse’s young love that never died. She had me rooting for these two from the moment Jesse returned to the ranch. As is the case in most of her stories, there is a clear “bad guy” and, boy, was this one a doozy. There was clear love between the two MCs, and that led to an easy reunion between them. There were some speed bumps on the journey, but it was obvious these two belonged together, and watching it happen was just lovely. This was a great way to start the anthology and another win for Ms. Griffin.

Accounting for the Hero – Silvia Violet

When Grant’s grandfather died and left him the ranch, Grant gave up his life in the city and decided to become a rancher. Unfortunately for him, he doesn’t have a lot of experience running a ranch, nor does he have the money to hire anyone that might be qualified enough to help him. He decides to bite the bullet and hire one hand, and hope that his ad brings him his very own hero. What he gets is Miles, a man with less ranch knowledge than himself and more of a talent with numbers than cattle or horses. The one thing Miles has in abundance is the will to learn. He also has a brother who lives close by, and an aunt and uncle who want to keep Miles far away because of his sexuality.

When Grant hears this, he knows he has just hired a new hand. It turns out to be the best decision he’s ever made. Not only does Miles work hard on the ranch, but he also takes a look at the books and helps find a way to give Grant more time before he has to bend to the developers that want to turn his beloved ranch into a shopping center. While working together, the two fall in love, and Grant has to decide if he is going to give the ranch a chance. Or will he sell when a very lucrative offer comes his way?

The relationship between Grant and Miles was a slow burn, but once it caught it turned into a wild fire. This story basically came down to whether Grant was willing to give his ranch and Miles a chance. The trip he took to get to this decision was difficult at times, but it was also pretty darned sexy. Once he sat down and just thought about it, he knew exactly what he wanted, and he set out to make it happen. Two men who had very little to call their own, find not only each other but maybe a little family, too, along the way.

This story starts out with Namid, the new small town doctor, out on a long walking tour of the town he has just moved to. Time has gotten away from him, and it is starting to get cold, so he stops by the first house he sees. When his knock goes unanswered, he hurts his toe on the raggedy porch while leaving. He meets Dusty, the home owner, while “borrowing” some socks off his clothes line. Namid ends up getting some first aid and some dinner from Dusty. When he starts yawning, Dusty invites him to spend the night. Namid is very excited to take him up on his offer, but is disappointed when Dusty takes the couch instead of taking Namid. When Namid wakes to Dusty’s house going up in flames, he drags an unconscious Dusty outside wearing only his boxers. When Dusty’s neighbors and the firemen and police see his state of dress, they assume that Namid and Dusty are together. This leads to hilarity with the town deciding they are going to open their arms with gifts of food, friendship and understanding. Namid is going to have to convince Dusty to accept not only Namid but the love of the town. This is quite a challenge while fending off attacks against Dusty and himself.

I am excited to see that this is labeled as the first of a series. There are some wonderful characters in this town and I can’t wait to see what is in store for them next. Freddy MacKay has the beginnings of a great series here.

The moment Dodge Bramen sees Roland Paulson, he is done for. He falls hook, line and sinker for the shy and slightly overweight hotel manager. Roland is a little smitten himself with Dodge. The two men have dinner together, and this leads to an explosive evening that gets cut short. When they get together again, the night finally ends as Dodge and Roland want it to, but there is so much more to it. They both feel connected to the other. Instead of a weekend fling, they both feel like there is so much more to this chance meeting. When a huge misunderstanding separates the two men, fate steps in and they get a second chance. It turns out they each have their own secrets: will they be able to stay together, or will it tear them apart?

This is also the beginning of a series, and Mathilde Watson has me hooked and waiting for more. I don’t want to give away the surprise ending, so all I will say is, well done, Ms. Watson. I didn’t see that coming at all, and I can’t wait to see what other surprises you have up your sleeve.

In this book, Angel Martinez revisits Shax, Ness and Verin. While Shax was recovering in sick bay, Verin and Ness took on a lucrative cargo run. It seems they have a cargo hold full of frogs and a dark matter generator. When the frogs get free and a little frisky, there are unforeseen consequences. It almost sounds like the beginning to a joke when you realize a fallen angel and two demons end up in the 19th Century Wild West. Here, Verin meets someone who could finally be more than a one-night-stand, and Shax shows that he is still all pirate. When they run into some trouble, they realize they have to find a way back to their time.

There is a lot of action in this story, and it has some very steamy cowboy moments as well. I am excited to see what these men will get up to next; there is no telling with how these characters carry on. I do know it will be just as exciting as this one!

You can buy Hot Off the Range here: