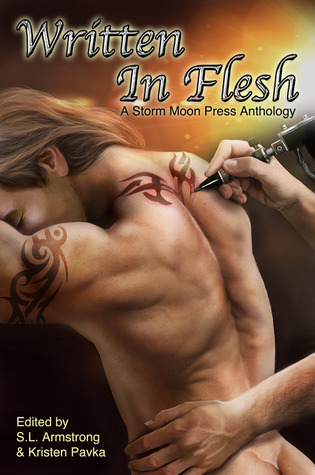 Blurb: For many people, there’s nothing hotter than a man with tattoos. He might get them to commemorate a lost loved one, celebrate an event, or just to look bad-ass, but there’s no doubt the man enjoys showing off his ink. Tribal, classic black and white, or elaborate colored artwork spanning the entire back, each mark has a story, an indelible reminder of the past etched onto the human canvas with care and precision. We’re showcasing four of those stories in Written in Flesh.

Review: Written in Flesh is an anthology about ink and the men who wear it. Out of the four stories, three where exceptional, and I can’t stop thinking about them! They were all different in writing styles but most of all, they where innovating and engaging. I really enjoyed this anthology and would highly recommend it.

Bound by Ink is a fantasy about a man who’s about to marry a woman he doesn’t love. Part of the marriage ceremony is a binding tattoo with the name of his intended inked on his arm and vice versa. He knows that he can’t live a lie. There are rumors of an island where everyone is free to love who they love. He runs away from his village in search of this island and a new life. Tattooing is a focal point of this story. I thought the concept of a tattoo as a public display of marriage was handled pretty well. There is a twist that still gives this story a happy ending. The writing was smooth and flowed, no awkward pauses to the story, and the sex was hot and satisfying! This was a really beautiful and sweet story. I didn’t want it to end.

Powder is a contemporary tale set in the 80s’ music scene. Honestly, I felt this was the weakest story of the bunch. The plot was a bit clichéd and for some reason, I just could not get into it or like the main characters. Also, the tattoos in the story did not work for me. It was almost as if they where an afterthought.

Helotry is a sci-fi story about a slave from a mining planet who escapes to the ruling planet. He meets up with a man who helps him evade capture, and this leads them to start an anti-slavery movement. But in the meantime, they have steamy sex! The tattoos are a mark of slavery, but in the rest of the universe, they are a display of foredoom, beauty and art. The story itself is very well told and is not your usual run of the mill short story. The chemistry between the main characters jumped of the page. In fact, the same can be said of the other stories too.

Mark of the Familiar is a paranormal/fantasy that can be described by one word: delicious! The story is about a magical being that’s rescued from a cruel master and placed in a home for abused paranormals. His body is marked with tattoos of different forms that he can take as a familiar. At this home he finds his true master. I loved this story because I haven’t read anything like it. The sexual tension between the leads was delicious!!!! It was funny and hot. And I’m going to say it again, sweet! The writing was witty and top notch. I really wanted this story to be longer because I think there’s more to tell.

This collection of shorts was pretty good and there’s something for everyone.

You can buy Written in Flesh here: