“Pull up a chair. Take a taste. Come join us. Life is so endlessly delicious.” ― Ruth Reichl 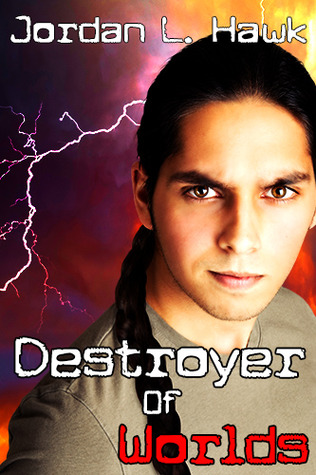 Blurb: After becoming possessed by the vampire spirit Gray, telekinetic Caleb Jansen thought his situation couldn’t get any worse. But that was before Graham Forsyth, head of SPECTR’s sinister Research Division, took him into custody.

Forsyth claims he can exorcise Gray before the forty-day time limit runs out. But once at RD, Caleb and Gray find themselves ensnared in a web of lies. What is the truth behind the tests Forsyth is performing on them? What does the agency really plan to do with Gray? And most worrisome of all, why does Gray sense demons within the walls of RD’s compound?

Caleb’s boyfriend, SPECTR agent John Starkweather, has suspicions of his own. With the help of his friend Sean and a shadowy organization known only by their symbol of a moth, John intends to save Caleb and Gray at any cost.

But when divided loyalties threaten his last chance at exorcism, Caleb discovers love may come at a price higher than he’d ever imagined.

Review: If Jordan L. Hawk was hoping for some enthusiasm for her efforts in this installment of the SPECTR series, she’s bound to get it from her loyal readers because, let me tell you, Destroyer of Worlds is explosive! Not to mention spectacular and filled with everything I could have ever hoped for, and then some, where Agent John Starkweather, his lover Caleb Jansen, and Caleb’s resident drakul spirit, Gray, are concerned. We’re talking a whole slew of, “whoa, I did not see that coming,” which has quickly and deftly elevated Book #5 in the SPECTR series to the top of my favorites list, only slightly edging out Reaper of Souls from that much celebrated position.

Filled with all the intrigue and action and danger you’ve come to expect from this paranormal lover’s paradise, the much dreaded and anticipated fortieth day of possession is at hand, and, if you’ve read Eater of Lives, you know that for John, Caleb and Gray, that ticking time bomb has meant nothing more than a countdown to the make or break moment which could mean life or death in more ways than just for Gray.

The fuse was lit the moment Gray took possession of Caleb’s body and has continued to burn steadily as we’ve watched their connection evolve from host/parasite to a symbiotic and emotionally entangled relationship, with John stuck in the proverbial middle of loving them both. Betrayal, unexpected alliances, and more danger than you can sink a fang into have thrown this series into a brilliant centerpiece of imagination, and Destroyer of Worlds has only served to elevate Jordan L. Hawk’s status as a premier author of speculative fiction. Anyone who’s storytelling skills are so adept as to take an entity like Gray, with no physical form other than what he’s borrowing from Caleb, and can turn him into a man with substance of character and depth of being and layers of complexity, is an author who deserves that distinction.

There’s more on the way from these men, hopefully much more, as old friendships are destroyed and new alliances must be navigated. Just hold on to your e-readers and prepare to be blown away!

You can buy Destroyer of Worlds (SPECTR #5) here:

2 thoughts on ““Destroyer Of Worlds” – Is It What You’ve Been Waiting For?”