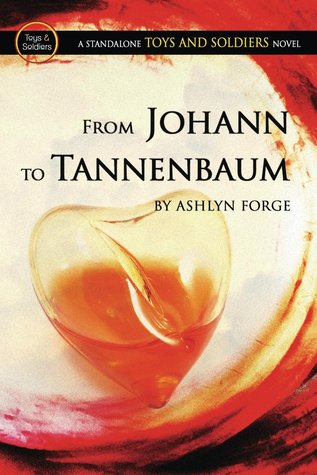 Title: From Johann to Tannenbaum

Blurb: Johann Andreas IV is a rich loser who has a raw deal in life. He is handsome, yet with a poor self-image, clever, but still uneducated, and despite being the heir apparent in his grandfather’s will, he’s about to be thrown out with nothing.

In the underground colony of his birth, two things matter the most to its denizens: a name, which will guarantee his wealth and status, and a designated branding tattoo, the only thing allowing Colony-Dwellers to live safely underground. Johann has one year to secure both.

He’s up to the challenge but one thing stands in his way; his mother has plans of her own…and they don’t include him.

Review: Johann Andreas IV has some deep-seated problems, everything from body and self-image issues to living with a mother who fat shames him, physically abuses him, and constantly calls his intelligence into question. Rather than stand up for himself, Johann internalizes all that shame, keeping quiet in the hope of being ignored, which causes him to behave in ways that only reflect poorly on him in the eyes of others in the Colony, the subterranean world Ashlyn Forge has created in her Alt U drama From Johann to Tannenbaum.

It’s a bold move to write a protagonist with the short list of significant problems Johann has, and the trick to doing it well, I think, lies in a delicate balance of making him sympathetic in his pitifulness. I have to admit there were times I didn’t feel entirely warm and fuzzy toward Johann, but I didn’t give up on him either, because I wanted to know what made him do the things he did and behave the way he behaved, and the author does eventually reveal the source of his dysfunction in spades and to pretty good effect, which went a long way toward helping me understand why he is the way he is.

Ashlyn Forge sketches out the culture of the Colony just well enough for the reader to get a picture of the caste system involved in its social structure, which includes a race called E, a people who can manipulate the earthly elements of their underground residence. There are distinct protocols in E/human relationships, one of which is they cannot touch skin-to-skin unless a bond has formed between them, adding a rather romantic element to the relationships. Tannenbaum, or Tanner, is the E who is introduced as Johann’s foil—different than the others of his kind, quiet, gentle and generous in nature, the perfect contrast to Johann’s sometimes abrasive personality, and the man who, through better and worse, stands by Johann and waits patiently for him as Johann goes through the evolutionary process of discovering who he is, and uncovering the deep, dark and dirty secrets in his family’s history. Tanner is Johann’s saving grace in the story and singlehandedly tipped the scales in favor of my liking the book.

Ashlyn Forge has a very easy to read style of storytelling, one that flows smoothly, though there were a few scenes in the book that I felt slowed down the pace of the story a bit, as those scenes only reiterated certain plot points that had already been made very clear rather than moving the story forward. Overall, however, as a huge fan of Alt U/Fantasy, I can say I liked From Johann to Tannenbaum, owing in large part to Tanner himself. He and his sweet and kind nature were the saving grace of the book, and helped to overshadow some of the less than agreeable characters in the story.

I’d recommend this one to readers who enjoy character rather than action driven stories, as ultimately, this book is about Johann’s journey from tragic to triumphant hero.

You can buy From Johann to Tannenbaum here: