“The road to finding ‘the one’ is paved with a bit of promiscuity.” – Tim Robbins 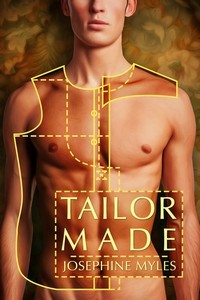 College tart Felix McAvoy is used to causing a stir with his conceptual art pranks, but for his final show he’s planning something even more outrageous. In a last ditch attempt to seduce his jaded tutor, Felix plans to wear the canvas in a subversive display. However, if he’s going to do this right he’ll need a tailor-made canvas suit. Fortunately, he knows just the tailor to turn to for the favour—and Felix isn’t shy about offering favours of a very different kind in return.

First year fashion student Andrew Wheeler knows Felix by reputation only–and plans to keep things that way. Andrew’s determined to save himself for the man of his dreams, and Felix couldn’t be more different from his ideal Mr Right. There’s only one use Andrew will contemplate for Felix’s body: a model for his end of year project. Trouble is, it’s going to involve a lot of close contact with a nearly naked Felix, and Andrew’s never had temptation quite so close at hand!

Review: There are some books I don’t mind reading more than once, so when Josephine Myles announced she was rereleasing Tailor Made and was looking for reviewers, I jumped at the chance to revisit the book I’d first read two years ago, and can say with complete honesty that I loved it every bit as much the second time around as I did the first.

Felix McAvoy probably shouldn’t be as loveable as he is considering he’s a bit of a tart, a slightly clumsy tart, even, and sees Andrew Wheeler as little more than a means to an end—and is willing to bend his own fabulous end over early and often to get what he wants—for Andrew to help him with his final art project of the year. A project, I might add, that couldn’t have come from the mind of anyone but Felix. Or Josephine Myles, if one is inclined to pick nits. But yeah, Felix is just cheeky and facetious enough that the fact he’ll trade sex with Andrew to win the attention of the man he really wants to have sex with doesn’t make him slutty as much as it makes him creatively enterprising.

Felix is a stellar example of Josephine’s knack for creating men who are flawed and loveable, partly in spite of and partly because of their funny little quirks. Andrew is a stellar example of her knack for creating men who don’t stand a chance against the charms of those men, and Felix and Andrew together are two men cut from very different cloths, the tart and the virgin, who eventually come to discover their fondness for each other’s bodies also includes a particular passion for owning each other’s hearts.

It takes a considerable amount of clever dialogue on Felix’s part to keep Andrew off kilter, and to make Andrew want someone who’s nothing at all like the Mr. Right he’d always intended to save himself for. It takes a considerable amount of courage on Andrew’s part to admit that with a nip here and a tuck there, Felix has redrawn the pattern of Andrew’s life and stitched his way right into the man’s heart.

Tailor Made is a book I breezed my way through again, start to finish, not because it’s short but because it’s just that easy to get lost in the author’s seemingly effortless prose and delightful sense of humor, and to become more than a little bit enchanted by a leading man who would go to such lengths to pooh-pooh love, only to fall right in it instead.

You can buy Tailor Made here: