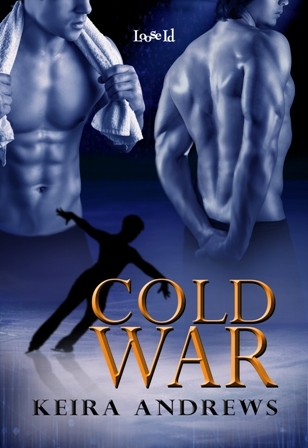 Blurb: After an explosive locker room confrontation with his Russian rival ends in the most surprising and intense sex of his life, American pairs skater Dev Avira needs to refocus. He’s worked for years to win Olympic gold, and he can’t let himself—or his partner—down. Distraction in the form of steely and smoldering Mikhail Reznikov is the last thing he needs as he prepares for the biggest competition of his life.

But with the Games only days away, they can’t keep their hands off each other. Dev soon learns that beneath Mikhail’s arrogant and aloof exterior is Misha, a passionate man who warms Dev’s heart and scorches his bed. They’re both determined to win, but for Misha his freedom could be on the line. Can Dev put his deepening feelings on ice as he goes for gold?

Review: Dev and his doubles skating partner are living the dream. They are the best skaters in America, and now they are on their way to the Olympics to see if they are the best in the world. The last thing either of them needs is a distraction, but that is exactly what Dev finds after an argument with Mikhail Reznikov, his Russian competition, ends with them having some fabulous sex.

Dev realizes that sleeping with the enemy isn’t a great idea, so with Mikhail out of sight, Dev tries his best to put him out of his mind. Too bad that’s easier said than done. Dev finds himself daydreaming about the Russian and wishing they could be together again.

When Dev arrives at the Olympic Games and sees Mikhail again for the first time, he realizes he is in deep trouble. The attraction isn’t only still there, but it has grown. As it turns out, Mikhail has had Dev on his mind too. When they do give in to their desires, they find out that they are more compatible than they could have ever imagined. After one night together, they share their hopes and fears, and it becomes obvious to Dev that no matter how badly he wants to win, Mikhail needs to win.

When it seems that Mikhail and his partner may not be able to compete, the stress gets to him, and he tosses Dev aside with some horrible accusations. Dev has to put it all aside and skate his heart out if he wants to recognize his dream of Olympic Gold, even if it means costing Mikhail everything.

I loved reading about Dev and Mikhail. These two men have spent their entire lives training for their one moment in the sun. Right when their dreams are within their reach, they realize they might have other dreams, more important ones. It turns out that winning isn’t always the biggest reward; sometimes it’s finding that dream you didn’t even know you had. It can also mean winning when it seems you have lost it all.

I think the author did a great job with the technical side of the book also. I have loved figure skating for as long as I can remember and Keira Andrews brought the sport to life. The struggles, the sacrifices and the hard work all come down to five minutes on the ice. She made the tension real and had me on the edge of my seat waiting to see who would take home the gold, and if Dev and Misha could find happiness.

I highly recommend this title and I would love to read more about Dev and Misha, and their little dog too. lol.

You can buy Cold War here: