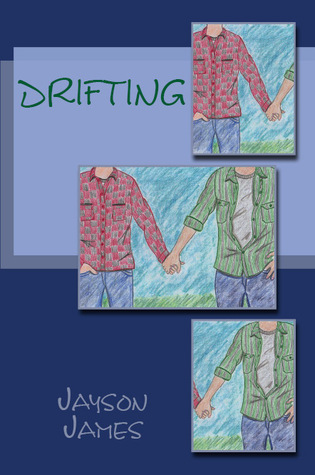 I am delighted to be here today as a guest blogger!

Today I am going to talk about my book Drifting. The idea for Drifting was something I’d had for quite some time and as I was finishing writing Finding Our Way, the idea for the book was fine tuned in my head. The premise for the story was something I had never seen done before. The books I’d always seen take two people and, through some sort of plot twists, they fall in love. What I wanted was a storyline that focused on what happens with these two people, essentially after the honeymoon period was over.

My editor insisted that I needed to write another book prior to the telling of this story, something that I agreed with, and set out to write Tormented Discovery. With there being two books out with Derrick and Justin center stage in them, readers got to know them and liked seeing the two of them together.

For Drifting, I wanted to do as I had done with the previous books and write a book where the reader could pick it up and read without ever needing to have read the previous books. Many people have told me that after reading Drifting, they were compelled to read the other two books but agreed that Drifting is a great book on its own. Like the previous books, the book is told from individual characters’ points of view.

Drifting takes a look at Derrick and Justin in college, out on their own together for the first time. They had transitioned from being best friends since middle school to being boyfriends. Life is going great for them, until one day they start looking at each other differently. They start with subtle annoyances that eventually work into both of them wishing the other person was someone completely different. This eventually leads to Derrick and Justin coming to an impasse of do they try and work out their differences, or do they break up. If they stay together, will they ever share the love they once had together, or will they be settling? If they are no longer boyfriends, will they be able to go back to being friends? Readers are able to see what each Derrick and Justin are thinking and feeling as they tell the story from each of their standpoints.

A new character, Ian, also has a storyline. Ian is someone that I have always wanted to put out there, I suppose in hopes of changing both gay and straight people’s perception of the typical gay. He is not skinny, good looking or anything like that. He struggles with his weight, self-esteem and is looking for someone to judge him on whom he is on the inside. Every scene I wrote with Ian relates to experiences I had back when I was heavier and trying to be part of the gay crowd.

Lastly, there is Ryan, about whom I received many emails from readers disappointed that I did not include his view when I had Hayden’s in the second book. It had always been my intention to wait for Ryan until the third book. Ryan is quiet and I wanted to give readers a chance to see what goes on beyond what he does not say.

I feel confident that readers, whether new or who’ve read any of the previous books, will enjoy the third chapter of the Finding Our Way Series. Since the first book, I have grown as both an author and cover artist, both of which I believe show in Drifting.

Thank you The Novel Approach Reviews for having me as a guest blogger today!

Here is how you can find out more about me and my books: