Hello! And thank you so much for having us here today. We are so excited to be making this stop on our blog tour for Five Ways a Boy Can Break Your Heart. I’m Cate Ashwood and I am half of the team that wrote it.

When Skylar and I were brainstorming ideas for this story, one of the first thoughts that came to mind was unrequited love. We knew we wanted the boys in love with one another right from the get-go, but neither one would know about the other’s feelings.

The reason we wanted to go in that direction is because it is so universal for people. I think everyone has, at some point, experienced it. Who doesn’t have a story of falling madly in love with someone who never returned their feelings? It’s a horrible and wonderful thing all at the same time.

My first case was in the first grade. His name was Jeffrey, he had red hair, and liked airplanes. I was head over heels for this boy. I would try to sit near him at circle time and I would be close by through recess and lunch breaks. And as starry-eyed as I was over him, he never noticed me. I was heartbroken.

Although he will always hold a special place in my heart, I did eventually get over Jeffrey . It took many candy necklaces and multiple bowls of bubblegum ice cream, but I was able to move on. For Trey and Liam in Five Ways a Boy Can Break Your Heart, it wasn’t so simple. When they are kids, studying music together at boarding school, Trey and Liam are in love with one another, but those feelings are never spoken. Seven years later, the feelings Liam and Trey have for one another have intensified, but there is a gauze-thin line between love and hate. 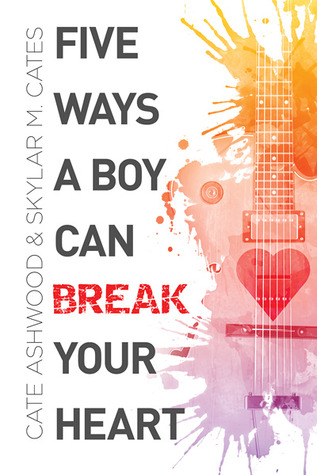 When Trey and Liam meet in boarding school, they couldn’t be more different. Liam is a classical violinist with a scholarship, and Trey is a punk rocker with famous parents. Despite their conflicting backgrounds, they hit it off and bond over their love of music. But after spending every waking hour together, Liam is devastated when Trey leaves school without an explanation. Worse yet, Trey capitalizes on a song they wrote together.

Seven years later, they bump into each other at a charity benefit in New York. Old sparks fly, but Liam hasn’t quite recovered from the pain Trey caused. Liam doesn’t know if any explanation Trey can offer will be enough, or if he can find it in his heart to forgive the only man he’s ever really loved.

And here’s a quick little snippet from the first chapter:

LIAM LET his heavy backpack slide off his shoulder and to the ground with a dull thump. He kicked it to the side before flopping himself down on Trey’s bed. Loosening the knot in his tie, he leaned back against the wall, careful not to catch the corner of a NoFX poster tacked haphazardly to it.

“The next two months are going to be epic,” Trey said, sitting down at his desk and rifling through a stack of CDs on the shelf. “The summer concert, the end of the year dance, and then… sweet freedom. I’m getting out of this place, and I’m going to spend my summer watching half-naked girls tanning on the beaches of Morocco. My mother just called today with the news.”

“Yeah, that’s great,” Liam agreed, not really meaning it. He hated summer. It was too hot, and he actually liked school. He was lucky enough to be enrolled at Kingston Academy, one of the top boarding schools in the country. Without classes, there wasn’t much chance for him to play violin. Summer was for working, usually at some lousy fast food place, and worse than all of that, Trey always left.

Trey held up a handful of CDs, fanning them out so Liam could see the covers. “Which one?” he asked.

“That one,” Liam said, pointing to the Strokes CD in the middle, knowing it was Trey’s favorite.

“Great choice,” Trey said, almost proudly. He stacked the rest of the CDs back on the shelf, then opened the case and carefully removed the disc. He placed it in the CD player and pressed the lid closed. Before Trey had a chance to hit the play button, David Thomlinson and Jason Wallace came toward Trey’s room, their donkey-like laughter rolling through the open door.

Liam tried not to cringe as they neared, hoping they wouldn’t notice him there. The last thing he needed was to remind them that he and Trey were friends. His heart still stung with what he’d overheard the day before.

David and Jason had been walking toward McLeod Hall and hadn’t noticed Liam walking behind them. Liam’s ears had perked up hearing his name.

“I don’t understand why Trey bothers to hang out with Liam Montgomery,” Jason had said. “Liam’s such a tool and everyone knows he’s a complete charity case. His dad’s a fucking mechanic.”

“Yeah, I know. I heard the only reason he got in here was because his aunt works on the board and she pulled strings to get him funding. If I were Trey, I’d be embarrassed to be seen hanging around with him.”

Liam had hung back, ducking sideways and taking a different route to his next class. He knew he was a charity case, but still, it hurt to hear the other guys in his class talking about it. Once or twice, he’d even wondered the same thing about Trey. Trey was so perfect. Perfect skin, perfect blue eyes, and a smooth voice that could make any girl melt. Even his spiky Mohawk, which Liam knew would look silly on his own head, gave Trey a fierce sort of beauty. If there was anyone who could be said to have it all, it was Trey.

It went beyond his good looks. As the son of the president and CEO of a major tech company, he and his mom flew all over the world. He was incredibly talented, too. It had been so much simpler when they were younger. An easy friendship had begun and had continued, until recently when doubts began to creep in.

What did Liam bring to the table? Not a whole lot.

Liam’s head snapped to the side when Jason knocked on the open door.

Trey turned toward Jason, but his gaze was still fixed on the CD player as he answered him.

“Nothing. Just hanging out.”

Jason noticed Liam sitting on Trey’s bed. He glared at him, the corner of his mouth lifting in an unattractive sneer. “With him?” he scoffed. “We’re heading to the caf if you wanted to come.”

“No thanks,” Trey said, finally looking up from the CD player. “We’re kinda busy.”

“But… I thought you said you weren’t doing anything,” Jason argued.

Liam watched as Trey’s eyes flashed with something he couldn’t quite place. Trey crossed the room and gripped the edge of his door.

“I’d rather do nothing with him, than anything with you,” Trey said. Jason scrambled to move out of the way of the closing door as Trey slammed it. Happiness blossomed in Liam’s belly at Trey’s words. He still had no idea why Trey would want to spend time with him over anyone else, but he wasn’t going to argue.

Without saying a word, Trey walked back across the room to his CD player and set the disc spinning. Liam didn’t say anything either. The understanding that they were best friends and no one else would come between them sunk into Liam’s bones. The music soon filled the tiny dorm room, cocooning them in sound.

Skylar M. Cates loves a good romance. She is quite happy to drink some coffee, curl up with a good book, and not move all day. Most days, however, Skylar is chasing after her husband, her kids, and her giant dog, Wasabi. Skylar dreams about spending her days writing her novels, walking along the beach, and making more time for her good friends. On a shoestring budget, Skylar has traveled all over in her early years. Although, lately, the laundry room is the farthest place she has visited, Skylar still loves to chat with people from all around the globe.

Cate Ashwood wrote her very first story in a hot-pink binder when she was in the second grade and found her passion for writing. Her first successful foray into romance writing came five years later when she wrote her best friend, who was experiencing a case of unrequited love, her own happily ever after.

Cate’s life has taken a number of different and adventurous roads. She now lives a stone’s throw from the ocean, just outside of Vancouver, British Columbia with her husband and two cats. Her life is filled with family and friends, travel, and, of course, books.

23 thoughts on ““Five Ways a Boy Can Break Your Heart” – Number One: Unrequited Love – But A Giveaway Could Make It Better”