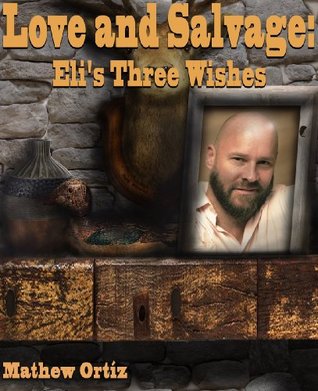 Blurb: Eli Gaither was a big, rough, mean sumabitch of a man. Solitary by choice, he only attended Gaither family events when he was made to. Still hurting from a painful divorce, he was like an angry bear licking his wounds. Most people, save for his family, avoided him until Oscar Hernandez came into his life, yelling at him and turning his world upside down.

Okay, maybe he was plain loco for hitting on the grizzly bear of a man in front of him but he couldn’t help it. The man was so freaking hot. But Oscar was not about to let this man tell him what to do and how to think. If Eli Gaither thought him a shrinking violet, he had another thing coming. Oscar was used to getting his way, so Eli was in for the ride of his life with the hot blooded Latin man.

Review: Some of my favorite lines from Eli’s Three Wishes, trust me there were more:

“Stop flirting with him, you burger fag.”

“Men are like shoes, Dad. Some are too tight, some too loose, some just don’t fit, others look good on the shelf, they are ugly when you try them on. You have to try on a few pairs until you get the right fit that looks good on you.”

Need I say more? I loved this book because one minute I was laughing out loud, and the next I was fanning myself! Yes, it was ridiculously funny and hot. What more can you want in a book?

Eli’s Three Wishes follows Emmet’s uncle Eli from Love and Salvage. Eli’s a divorced, bald, tattooed, rough looking redneck in his 40s, who’s ready to settle down and find his love. He’s finally comfortable with being bisexual and wants the same relationship that Emmet and Alex have. Through his antique business, he meets Oscar Hernandez, a Latino from Atlanta. He’s young, successful and sexy as hell. They form an instant attraction. I think dynamite is less explosive than these two. Eli has reservations about Oscar because he is way younger than Eli is and can’t understand what the young man sees in him. But the sex is out of this world, and that always helps!!!

Obviously these issues get resolved, and our guys get a HEA. The supporting cast was top notch as always, and I wanted to read more about them. There’s a subplot involving Eli’s teenage son, which was brilliant and I’m not going to give anything away. There were references to Renovating Love characters, and it made me want to re- read those books again. A couple of new characters were introduced as a setup for the next book, which I can’t wait to read because it will have witches! YAY! At the end there’s a cute reference to the book’s title which made me smile. The whole book was just plain sweet! It did not disappoint.

Eli’s Three Wishes is a must read!!!

You can buy Love and Salvage: Eli’s Three Wishes here: