“Love hurts. There is nothing as painful as heartbreak. But in order to learn to love again you must learn to trust again.” -Nicholas Sparks 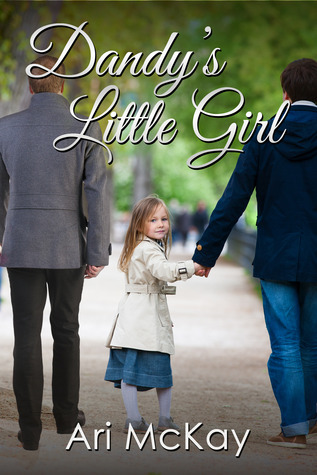 After losing his partner, Jeff, and raising their daughter Emily by himself, he’s not used to thinking of anyone in a romantic way. But when he moves back to Chicago and meets former classmate Andy Lane again, Andy somehow manages to worm his way into Noah and Emily’s lives – and into Noah’s heart. Noah watches Emily and Andy grow closer, but Andy doesn’t seem to want anything more from Noah than friendship. What’s a father to do when he realizes balancing love and parenthood isn’t as easy as he’d always thought?

Review: I want to begin this review by stating that I have enjoyed many stories from the pen of this writing duo. Known for producing some of the best novellas on the m/m market today, Ari McKay has delivered time and time again with interesting and solid romances. Dandy’s Little Girl, unfortunately, fell short of the standard I have come to expect from these authors, and so I took a great deal of time trying to analyze why and where this story just fell a bit short.

The overall theme of the story was a sweet one. Noah Coleman is back in his hometown after more than a 10 year absence. He brings with him both heartache over the loss of his partner, and their young daughter, Emily. While on a visit to see Santa, Noah unwittingly runs into a former classmate, Andy Lane. Andy has changed dramatically since high school. Formerly a goth bad boy who snarled his way through high school, bitter and snarky, at best, he is now an assistant manager at one of the town’s iconic toy stores and is looking for a good man with whom he can begin a family of his own. The stage is set, at this point, for a lovely cat and mouse dance between these two men to begin.

Noah, having failed at finding any real connection to another man for the last several years, is determined to establish just a friendship with Andy, not only to spare his daughter any emotional attachment to a man who potentially will be nothing more than a casual fling but also to guard his own still tender heart. Andy, on the other hand, is patient and willing to wait for Noah to come round to seeing his point of view—that these two men are a match made in heaven, with an instant family to boot.

The story began so well. The authors set up their premise with their usual expert handling, and gave us two potentially dynamic and interesting characters. Little Emily was truly adorable and on the page just often enough for us to really fall in love with her and the way in which she loved her Daddy, and was quickly falling in love with Andy. Unfortunately, the story never seemed to take real shape after the solid opening. The connection or spark that should have ignited between these two men seemed tepid at best. I got more emotional urgency from Andy than Noah, and even Andy seemed so determined to be laid back and not scare Noah off that it was hard to feel that either man was ever fully invested in the other.

As the novel progressed, I found that it was little Emily who seemed to have the lion’s share of a growing love for her father’s friend, Andy. Consequently, the turnabout toward the end of the novel, with its sudden electrifying connection between these two men, seemed a bit false and forced. I simply had a hard time jumping from this lazy stroll of a relationship to the fervor of two men sexually and emotionally attracted to each other.

At the end, Dandy’s Little Girl by Ari McKay was just a so-so story for me. Lacking the usual passion and intense storyline that is the earmark of this writing duo, the story just limped along. Ari McKay so often delivers really good stories, unfortunately this one just missed the mark.