“There’s none so blind as those who will not listen.” ― Neil Gaiman 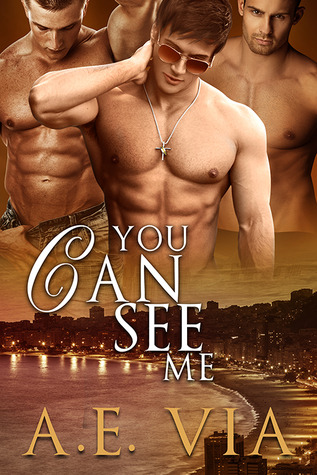 Title: You Can See Me

Blurb: Renowned Chef Prescott Vaughan was at the height of his career when a car accident leaves him completely blind. His fiancée leaves him in a state of desperation and depression. Prescott pines for love and happens to find it in his neighbor; male neighbor Dr. Rickson Edwards. Prescott never considered himself gay, but when Ric saves him, Prescott begins to view his rescuer differently. However, when Ric and Prescott have problems, Prescott seeks comfort from an escort but was unprepared for the sexy, southern, hotness that is Blair McKenzie. Prescott now has to choose between his two men…or does he?

Review: A.E. Via explores a ménage relationship in her sophomore novel You Can See Me, the story of a man, Prescott Vaughn, who, along with losing his eyesight in a car crash, also loses his ability to see that sometimes being alone is the lesser evil if one’s only other option is being with someone whose greatest pleasure exists in humiliating and demeaning.

You Can See Me is a novel that focuses on a relationship between three beautiful men, but it’s also a good look at all their frustratingly human flaws: they’re impulsive, jump to the wrong conclusions, make themselves the victims of those assumptions in their inability to listen and communicate; they feel jealousy and fear and remorse, and behave childishly at times, which makes them flawed and realistic, if not somewhat irritating, and reminds us that even the smartest of people sometimes do not-so-smart things. The author seems to have purposefully written these men to exasperate in order to coax the maximum emotional reaction and participation from the reader in the story, and it worked. If you love an angst filled novel, this is your go to. You Can See Me relies heavily on the “big misunderstanding” to introduce the conflict into not only the relationship but also uses it as a means of added drama for not only Pres and Ric, but Blair McKenzie as well, once he’s introduced to the story. It all lent a commonly employed bit of tension to the plot in all the ways we readers feel aggravated by characters who can’t or won’t say what needs saying or refuse to listen to what needs hearing.

The themes of unconditional love and acceptance and the ability for love to heal what’s broken in these three men thread their way through a relatively uncomplicated plot and a writing style that’s straightforward and accessible. The female character as the shrewish antagonist is also a device relied heavily upon in the storyline, maybe a bit too heavily for my own personal taste, but it does provide the catalyst for Pres to seek out something different with Ric and contrasted well with the way Ric and Blair love Pres, sighted or not, for who he is and not for what he could do for them. Although I’d have loved to see Pres’s exes take a good and much needed karmic bitch slapping, I’ll have to be satisfied that his ultimate happiness is his best revenge.

You can buy You Can See Me here:

One thought on “A.E. Via’s “You Can See Me” Makes A Menage Relationship Work”