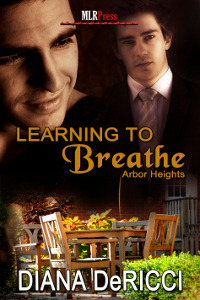 Blurb: To Remy, size is a state of mind, a fact few really learn to appreciate. When it wasn’t clear he’d live past being an infant, he grew up fighting. Fighting to live. Fighting to be treated with respect. The last thing he thought he’d have to do is fight his own heart. Getting clocked across the face wasn’t one of Ben’s better moments. Grudgingly accepting help from a pint-sized, argumentative Remy, he’s among those who learn the hard way small doesn’t necessarily mean weak.

Review: Oh my goodness, ever since I was introduced to Remy in the first book of this series, I was totally in love with him. He is definitely the definition of “dynamite comes in small packages”. He proved this in Learning to Live, when he decided to punch the big construction worker in the face after he broke his best friend’s heart.

This book is not only an opposites attract story, but there is a little “don’t judge a book by its cover” storyline in there also.

Remy and Ben have been antagonistic towards one another for so long that it is hard for them to switch gears when they realize they are attracted to each other. Remy has always had to fight. He fought sickness as a child, and he had to fight against stereotypes when he realized he would never grow taller than five foot five as an adult. He not only learned to verbally spar, but he can physically defend himself, thank you very much.

Ben doesn’t know how to take Remy. Ben is used to men wanting him to take charge, and he doesn’t exactly know how to react to the take charge man that is Remy. It is hard for Ben to admit to his shortcomings with money management skills and education to anyone, especially a man he is attracted to.

Once Ben and Remy begin to talk to one another, and they both confess their deepest, darkest secrets, they find themselves on the same page, and it is AH-MAZING. These two were completely scorching together, but at the same time, sweet and loving.

As great as they were together, there were some issues from Ben’s past that had to be addressed before they could find their HEA. Remy would have to let go of Ben’s past with AJ before the two men could really be happy, and letting go has never been his strong suit.

Diana DeRicci has a wonderful talent for storytelling, especially when she writes a series. Whether she is telling us about shifters, men recovering from heartache, cops, or construction workers, she has a talent for telling us a wonderful story. I would highly recommend this book. You can read it as a standalone, but reading Learning to Live first will help set you up for this book.

You can buy Learning to Breathe (Arbor Heights #2) here: