“Those who are closest to you, always betray you first.” ― Susan Speranza 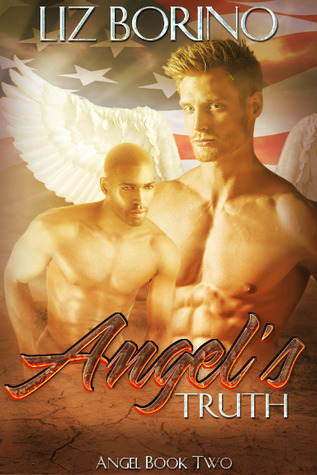 “Jordan?” Aaron whispered his name as recognition painted a mural of memories of their life together on his face.

“Yes.” He coughed red into his dirty hand. “Please help.”

So begins Angel’s Truth, the sequel to Angel’s Hero. Army Captain Jordan Collins arrives home, only to find the man responsible for his imprisonment, torture, and near-execution with his husband. Had his Angel moved on without him?

Aaron “Angel” Collins has driven his family and friends away in his quest to learn the truth of Jordan’s fate, leaving only Major General Troy Hart willing to help him. When Jordan miraculously returns, with a spirit more broken than his body, Aaron realizes Hart was really a liar with an agenda of his own. Aaron is unable to take time to heal his own emotional wounds, because he and Jordan learn Hart’s betrayal is even greater than they originally believed, threatening the entire nation. Now the reunited couple must race against time to keep a promise to Jordan’s savior and prevent Hart from bringing terrorism once again to American soil.

Review: Note: This is the second book in the series. Angel’s Hero should be read first.

Jordan is home. The physical and emotional healing has begun for both men. The happy homecoming is marred by the fact that one of their own is responsible for causing so much pain and misery.

Now that Jordan has found his way back home, the real fight for justice is about to begin. He knows who was behind his imprisonment in Afghanistan. With Aaron by his side, these two will stop at nothing to get the truth out. Vengeance is going to be sweet.

Wow, this was nonstop action and drama all the way through. I really liked how the author brought everything together and answered all the lingering questions from the first book. Seeing Jordan and Aaron together again really solidified my feelings that they truly deserve to have their happily ever after. I felt this was more of a romance than the previous book. From the time they were reunited with each other, to the very end and all the in between, these two moved as one, and nothing is going to separate them again.

The storyline continues from the first book, and we get a true understanding of what is really at stake here: treason, conspiracies, and maybe even a terrorist attack. I loved how we go along with the characters seeking answers and finding out facts. Not many authors can weave a mystery with words, let us know who the bad guy is, and still keep us on the edge of the seat. Liz Borino does just that.

As in the first book, the secondary characters make their presence known. Some have to redeem themselves, and do so with flying colors. Others are still as they always were, strong and supportive. We also see a new, albeit unconventional, friendship come out of all this. It was great to see Jordan and Aaron surrounded by those who loved them and were there when they needed them the most.

After all the smoke has cleared, promises are kept, bonds of love are reinforced, and justice is served. Jordan and Aaron finally have their together forever.