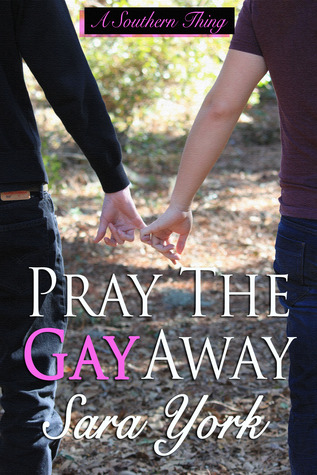 Title: Pray the Gay Away (A Southern Thing #1)

Blurb: Star football player, Jack Miller, had it all. The perfect family, looks, girls hanging on his every word, and the respect of most people in his town. But one thing was missing–a man to be his own.

When Andrew Collins showed up in small town, conservative Sweet, Georgia, he looked more scrawny mutt than high school senior. Andrew’s plan was to keep his head down and graduate high school, leaving his family behind to start his real life.

When he meets Andrew, Jack thinks he’s found heaven, but reality holds him in check until one night when his lips gently slide across Andrew’s and fireworks go off.

As lust and something a little deeper brings them together, compelling them to take chances, people start to notice. Then the unthinkable happens, and Jack’s parents find out he likes guys. The battle lines are drawn and they vow to pray the gay away.

Review: Many of us who read (or write) books in this genre have read a book about strict religious parents forcing their children into a closet. Whether doing it knowingly, or unwittingly, the outcome is not usually a good one. In Pray the Gay Away Sara York has shown us both sides of this situation.

Jack Miller is eighteen years old and the oldest of ten children. He lives in Sweet, Alabama, a small town where Jack is the football hero and his father is the local preacher. When Jack realized that he liked the boys around him a lot more than the girls, he knew he had to keep it a secret. So, Jack created a public face. He was the All-American young man. He played football, helped out at the church, and avoided all the local girls by using his father’s religion to claim he wanted to wait for marriage before having sex. This seemed to work for Jack, right up until Andrew Collins comes to town and Jack realizes he has met his future.

Andrew Collins tried his best to hide his sexuality, but after being caught with a boy, his parents have not only moved him from his hometown of Atlanta, but they have put harsh restrictions on Andrew to “cure” him of his affliction. When Andrew meets Jack, he is wary of him. Jack is too nice, and Andrew worries what Jack will do once he finds out that Andrew is gay.

When Jack and Andrew finally come clean with one another and confess their attraction, they quickly move from just friends to boyfriends. They both know that they have to keep their feelings for one another under wraps. Andrew’s parents already starve him to try to cure him, and Jack actually fears for his life should his father find out the secret he has worked so hard to keep. The two boys make plans to tough it out until graduation. Jack has this plan that he has been working on behind the scenes. He is hoping for a football scholarship to get out of Sweet, and he wants to take Andrew with him.

We all know what happens to the best laid plans, and unfortunately for Jack and Andrew, they learn this the hard way. When Jack’s father finds out his secret, Jack tries to stand up to him, but Nathaniel Miller won’t be beaten. There is only one thing that could make Jack toe the line, and his father plays that card perfectly. Jack has a decision to make, and it certainly won’t be an easy one.

While reading this book, I ran the full spectrum of emotions. I was angry, scared, touched, happy, sad and many, many other things all at once. As a parent, I can’t imagine not loving my children exactly the way they are, and it saddens me that even though this story is fiction, written for me to enjoy, there are too many children to count, who are living this every single day of their lives. There are children living in fear of the people who are supposed to love and protect them. There are children who learn to hate who they are from the people who are supposed to teach them to love themselves. Worst of all, there are parents who would both physically and emotionally destroy their children because of their religion.

Sara York has brought all of these issues to the forefront in Pray the Gay Away. While reading it, I could put myself in the shoes of these boys, and I ached for them. I remembered how I felt that first time I fell in love. The happiness and the wonder. Sitting with my friends and gossiping about the boy I liked, and going out on dates, and the butterflies when I was kissed properly for the first time. Then I thought about how Jack and Andrew got none of that. They couldn’t tell anyone, they couldn’t show anything other than friendship in public, they lived in fear only because they loved one another.

This story was wonderfully written, and I truly bonded with Jack and Andrew, but I will warn you that there is no HEA…..yet. There are three books total for this story. With the way this first story ended, I fear that my heart will be broken badly. However, I am also sure that Sara York will take my broken heart and fix it up just right by the time the three books are complete.

I can’t recommend this book enough, and I will be the first in line for the next book in the series.

You can buy Pray the Gay Away (A Southern Thing #1) here: