“Because there’s nothing sexier than a bad boy on the right side of the law.” – Rhys Ford 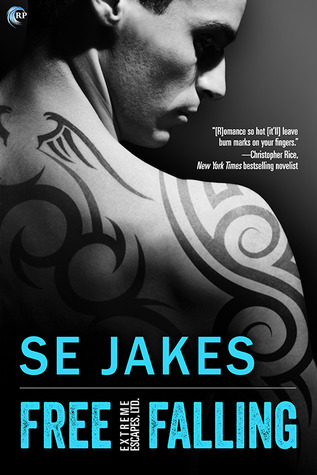 Blurb: Sometimes falling in love is the most dangerous thing of all.

Blue is a thief who lives for adrenaline and danger. And when he meets Mick, a mercenary, he’s hit with a buzz of attraction like the rush of a high-rise job without a safety rope. But after making plans to get together, Mick leaves him hanging, and Blue vows never again.

A year later, Mick watches helplessly as Blue stumbles into the middle of one of Mick’s jobs. Risking his cover and their lives, Mick saves Blue and cares for him as he recuperates, but neither man has any idea how to handle the intimacy this forces them into.

Once Blue is safe, Mick redoubles his efforts to take down the drug lord responsible—and disappears. Blue goes after him, determined to return the favor and rescue the man he loves, no matter the cost.

Review: Sexy. In a word, that’s what Free Falling is. Blue is a bad boy, unapologetically so, on the wrong side of the law for the right reasons. Mick is a bad boy on the right side of the law…mostly. He helps catch criminals, gets them off the streets—in some cases in a very permanent way, if you catch my meaning—but that doesn’t necessarily mean he follows the rules. SE Jakes has done the one thing it must be so much fun for an author to do; she’s created a couple of characters whose dealings may be a little shady, morals a little sketchy, but who’re easy to love because they’re comfortable in their own skin. Regardless of how anyone else sees them, they’re entirely right with who and what they are, and that kind of confidence is always so very yummy.

The setup of the relationship between Blue and Mick is a novel one: they lust after each other, even going so far as to wager a night of sex on a heist, a bet that Mick wins but then forfeits for Blue’s own good. Not that Blue knows that, which the author capitalizes on a year later when they run into each other while Mick is on a sting that, depending on how you look at it, either goes to hell in a handcart or is a blessing in disguise. Whichever the case, it gets the two men where they want to be, even if it is under less than ideal conditions.

The author crafted these characters in the most ideal of ways. They challenge each other, there are no simple inroads to their relationship, no convenient concessions by either man to change in order to suit the other’s demands, but that’s not to say there aren’t a few adjustments made in order to make a future possible, and while I’d have liked the build up to the “I love yous” a bit more fleshed out on the page, there’s no denying there’s chemistry between them, so much so that I bought into their feelings for each other simply because they’re two sides of the same coin.

As first experiences with an author go, I have to say I came out the winner in this one. If Free Falling is any indication, SE Jakes is well versed in writing strong and sexy characters who’re laced with vulnerabilities, confident yet, at the same time, so unsure of where to step in the minefield of opening up to someone else. Blue is a loner by choice because that’s what he was taught works best for a thief. Until, that is, Mick comes along and makes him rethink those ingrained lessons; then all bets are off. The pacing of the story never let up, between the action and the…action, and the pages of the book ran out before I was ready for it to end.

If you’ve never read SE Jakes before, I can’t say definitively this is the book to start with. I can say with some confidence, however, that if you don’t start here, do yourself a favor and start somewhere, because this author clearly knows her way around well crafted characters and a sexy storyline.

You can buy Free Falling here: