Hi! We’re Eleanor and Holly, the writing team of H.L. Holston and Eleanor Bruce. We’re extremely excited to be attending Rainbow Con in Tampa next month. It will be our very first writer’s convention, so if you are coming, please be sure to stop by our table, say hello and grab some free swag. (We’ll also be giving away a gently-used Kindle Fire, books and an Amazon gift card!)

We’re never sure what to write for these types of blog posts. Do you promote your book, yourself or perhaps both? Last time we did this, Eleanor and I talked about our undying love of all things Springsteen. :) But today, we decided to delve into the topic of werewolves since we are currently writing a series entitled, Werewolves of Baltimore.

We never thought we’d be writing about shifters, since Eleanor and I both love vampires; we cut our teeth on Anne Rice’s Interview with a Vampire novels. Plus, I was always Team Edward, not Team Jacob, as a Twilight fan. (Hear that laughing over there, that’s Eleanor mocking me for my great love of all things Robert Pattinson.)

Our first paranormal book, The Moon’s Dirty Light is set in Baltimore. The protagonists are both cops, they’ve been partners for years, but only recently became lovers. One’s keeping a secret…he’s a werewolf and during their last little romp, Logan passed along that trait to Dylan. Who when he finds out, is not happy at all he’s going to be turning into a furry beastie come the next full moon. Add in a serial killer, knotting, bonding and a few other tropes, and you got the first novel in our series.

To celebrate us attending Rainbow, we’re doing a giveaway. Eleanor and I are offering up BOTH books in the Werewolves of Baltimore series, The Moon’s Dirty Light and Beneath the 13th Moon on The Novel Approach. Please use the Rafflecopter link to enter.

Thank you, and hope to see you in Tampa!

Holly and Eleanor
Twisting tropes since 2013! 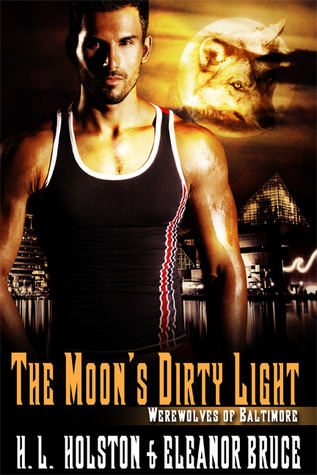 Is there ever a good time to tell the man with whom you just had mind blowing sex that you’re a werewolf and, chances are, come the next full moon, he’ll be sporting fur and fangs too?

Police Officer Logan Robinson isn’t sure. Logan’s been in lust with his partner and best friend Dylan Reed for as long as he can remember. But Logan is a werewolf and after accidentally giving his partner the mating bite during sex Dylan will become one too.

Dylan is royally pissed when he finds out because Logan conveniently forgot to mention his little affliction until after they’d spent the night humping each other’s brains out. As if turning into a creature of the night wasn’t enough, Logan and he are investigating murders that look suspiciously like dog-attacks, but they’re not.

Finding a killer is tricky enough. Now it will be almost impossible with their personal issues clouding the investigation. And if Dylan does turn into a four-legged freak at the next full moon, the fur will fly.

Eleanor has been a professional business writer since 1989 and an amateur fiction writer for over fifteen years. She never considered writing fiction professionally until her friend, H.L. Holston, asked for her help with a short story. From there, Eleanor has gone on to write two books and another short story with Holly. She hopes that someday she can quit her job and write full-time. Until then, she juggles her responsibilities with varying levels of success.

H.L. Holston (Holly) is a teacher by day and a sometimes author by night. She dreams up ideas with her writing partners Sue (they write as Sue Holston) and Eleanor Bruce, but occasionally she ventures out on her own. She admits she is a horrible blogger, even worse at keeping up on Facebook and wishes she could retire to New Orleans and eat beignets every day at Café du Monde. Until then, she will write books about sexy men loving each other.

The Giveaway: Enter for a change to win an e-copy of both The Moon’s Dirty Light and Beneath the 13th Moon.

8 thoughts on “H.L. Holston And Eleanor Bruce Celebrate The Countdown To RainbowCon With A Giveaway”