“I come to you with blood on my hands and you see peace?”

“You come to me with blood on your hands and I see sacrifice.” – 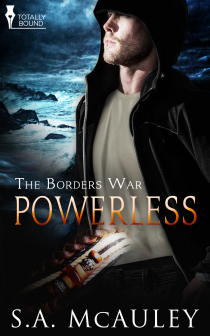 Blurb: He was built to be invincible.

Merq and Armise return to the States after their mission to assassinate the remaining Committee members only to find the leadership of the Revolution isn’t as stable as they had thought.

Outside forces come crashing down on a Revolution stronghold, leaving two of their soldiers gravely wounded. Merq’s history with his brothers in arms Simion and Neveed forces him into making decisions that will impact his future with the Revolution.

Merq has always identified as a soldier first. Always known who deserved his loyalty and who didn’t. But with the uncertainty surrounding the leadership of the Revolution, the mysterious disappearance of the jacquerie and increased activity with the PsychHAgs, Merq knows there are few people he can trust.

The only man Merq wants or needs at his side is Armise Darcan. But his reliance on his former enemy may be a miscalculation that will threaten everything Merq stands for.

Review: Merq Grayson is a man whose life has never truly been his own. Genetically altered to become a tool of war and trained to be a killing machine in the name of the Revolution, the Peacemaker and the man who is his lover, was his enemy, and is his sworn protector, swim through the murky waters of secrets and lies by omission and tread headlong into betrayal in Powerless, the third book in S.A. McAuley’s Borders War Series.

There is as much mystery as there is revelation in this book, but perhaps the most revealing aspect of it all is Merq himself. Merq has always had a way of hiding the truth, even from himself, burying his own needs beneath the armor of his duty to his President’s cause… until Armise Darcan insinuated himself into Merq’s life, made himself an ally—not to the Revolution but to Merq and Merq alone—becoming as crucial to Merq as breath and leaving him vulnerable to his own emotions. Powerless is Merq’s evolution, the point in his life when he’s forced to examine his allegiances, his decisions, his actions, and to confront everything he’s ever known of the life he’s lived to this point.

War makes men of boys and monsters of men in a place and time when the will to survive often means sacrifice; when the survival you’re ensuring isn’t only your own but that of someone you’d lay down your life for in the name of love and loyalty, even if it meant your own death would ensure his next breath. S.A. McAuley brings the relationship between Merq and Armise Darcan to a pinnacle in Powerless, a nonstop action packed adrenaline rush that kept my nerves buzzing with anticipation at the turn of every page.

The world between the covers of this series is dank and gritty and atmospheric, rife with danger and a sense of oppression, where joy is non-existent and hope is the vague and elusive pinpoint of light in the dark and uncertain future that keeps these characters fighting for…everything. The greatest danger of all, though, may be the ties that bind these two unpredictable and volatile men to each other, and the question of whether they can survive it is, right now, an assumption based more on want than fact.

Every single nuance, every single overt action and covert emotion, every single word and look and intention is acted out perfectly by these characters in this installment of the Borders War Series, from the heart thudding action to the heart-wrenching moments that brought a lump to my throat, this book delivered on every level. There are promises made, but can they be kept? The vagaries of what is yet to come make it impossible to predict. But there is always hope.

Fair warning: when you read Powerless, prepare to be left gasping for breath and begging for more.

You can buy Powerless (The Borders War: Book Three) here: