“A friend is someone who gives you total freedom to be yourself-and especially to feel, or not feel. Whatever you happen to be feeling at any moment is fine with them. That’s what real love amounts to – letting a person be what he really is.” ― Jim Morrison 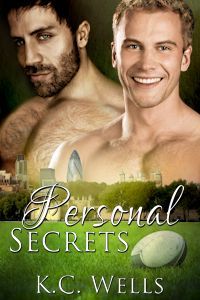 Blurb: Blake Davis and husband Will are delighted when Ed Fellows turns up at the hospital the night their daughter is born—even if he is covered in mud from playing rugby and drunk out of his skull. Team-mate Colin is the Good Samaritan who drives him there, and when Colin takes Ed home, Colin finds himself on the receiving end of a blow-job. He has no problem with that whatsoever. He’s been in lust with Ed since Ed joined the rugby team some fourteen months ago. Only thing is, Colin’s assumed up ’til now that Ed is straight. Except the man sucking him off certainly didn’t seem straight….

Talk about the morning after the night before…. Ed awakens to find a nearly-naked Colin asleep on his sofa. The problem is that for some reason, he can’t get Colin out of his mind. Okay, so it wasn’t the first blow-job Ed’s ever gotten from a guy—or given, for that matter—but that was a long time ago, right? And why does Ed now want more?

With friends Rick, Angelo, Blake and Will to advise him, Ed finds himself on a completely unfamiliar road, as he struggles to accept that maybe the line he is walking isn’t as straight as he’d first imagined…

Review: I have had a soft spot for Ed for a while now. I enjoyed his unapologetic brashness through the whole series, and I couldn’t wait to read his story. I love that Ed was this big, tough rugby player with an accent that was, at times, tough to understand. I have to say that I had built up so much enthusiasm for this book I was worried that it might not live up to my expectations. I am very happy to say that was not the case.

Ed was always a supporting character in the series. He was Blake’s right-hand-man at the publishing house, and a long time friend. He stood behind Blake and Will and supported them through everything. As big, burly and crass as he was, Ed’s loyalty and kind nature never failed to shine through. When we got a glimpse of him at the pub with Colin and saw him through Colin’s eyes, we got a whole other perception of Ed. Instead of the bumbling oaf, we got to see the sex appeal that Colin saw. As the story goes on, we also got to experience the inner turmoil Ed was going through. One drunken night with Colin ignites things in Ed that he thought were long ago put to rest.

Colin is an ad exec and has been Ed’s teammate for a while. He has never really come out to the team, but he also hasn’t hidden his sexuality from them. It just never came up before. When he spends the night drinking with Ed, he has no idea that his long hidden fantasies are about to come true. When morning after awkwardness threatens to squash everything from their friendship to the beginnings of what could be much more, Colin is shocked when Ed is the one to break the stalemate.

After waking up to a half naked Colin snoozing on his couch, Ed is so much more than confused. He isn’t gay…right? It wasn’t the first time he had received a blow job from a guy, not even the first one he has given, but that was a long time ago, and he likes girls…doesn’t he? These are all questions he has to answer in his own way. He uses all of the resources available to him to make sense of what he is feeling. Will, Blake, Rick, and Angelo do their best to guide Ed and help him work through his fears and these new feelings he is experiencing. At the end of the day, though, Ed learns all he needs to know from Colin. He learns about trust and love, not just of Colin but of himself also.

K.C. Wells has written another fun and emotionally poignant story in the Personal Series. What started as Blake and Will’s story has continued, with all of their friends finding their HEA. None of the paths were easy, but I think Ed and Colin had the hardest road of them all. I liked that even though they had a tough road they never gave up; they kept working and they kept on loving one another. If this is the last of the series, then I think it definitely ended on a high note.

Highly recommend this story and the entire series.