“You didn’t just cheat on me; you cheated on us.” – Steve Maraboli 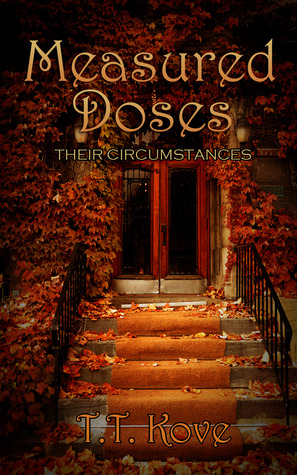 Blurb: After his father beats him, Chad escapes to the only safe haven he can think: his former teacher, Dion. But when he arrives at Dion’s door, it’s opened by a stranger—who promptly finds himself catching an unconscious man.

Unable to turn away the broken, battered Chad, Jeremy takes him in and tends his wounds, even if he would much rather have nothing to do with the student that his ex, Dion, cheated on him with …

Review: What is a man to do when the man he loves cheats on him with a student? For Jeremy, that is a question he has been asking himself for the last few months. When his lover Dion strayed one time with a student, Jeremy was devastated. He loves Dion and doesn’t want to let go, but he doesn’t know how to move past it. So, he moved into the guest room. His worst nightmare shows up at the door, and Jeremy is torn.

Chad’s life isn’t an easy one. He has flunked out of college, and living with his father is detrimental to his health. Being used to acting as his father’s punching bag, he is still shocked at the viciousness of the latest beating. When he finally regains consciousness, his only thought is to get out. The problem is where will he go? He doesn’t want to get the authorities involved, and if he goes to his aunt that is exactly what will happen. It seems his only option is to go to Dion, even if Dion told him they were a mistake and dumped him because he was in love with his partner. Chad knew Dion wouldn’t deny him help if he needed it.

When Chad arrives at Dion’s apartment, however, it isn’t Dion who answers the door. When Jeremy opens the door, he quickly realizes who Chad is, but no matter how much he wants to turn the man away, he can’t. He helps Chad clean up, feeds him and makes him rest. Jeremy is torn between hating Chad for what happened with Dion and wanting to take care of him.

Over a short time, Dion, Chad, and Jeremy tiptoe around their issues and when they finally reach the point of no return, Jeremy has to make a choice. He realizes that either he or Chad are going to be hurt in this situation because they both love Dion, and the feelings are mutual.

With some advice from a very unlikely source, Jeremy is faced with a huge decision. It is not something he can decide on his own, so he puts a plan in motion that could very well cost him what he holds closest to his heart, but if it works out, it could be the answer to a hope he never knew he had.

This was a difficult book for me. I liked the premise and the writing was good. My biggest drawback, however, was the fact that it just seemed too easy. I don’t think that there has to be a huge amount of angsty tears and knockdown, drag out fighting to overcome fidelity issues in a relationship, but I feel there should be SOME serious conversations. In my opinion, the author missed some very ripe opportunities for dialogue between the three men in this story. It seemed as if each character was working out the issues between the three of them on his own. Even worse, we never really got to experience Dion’s thoughts about the situation. He seemed to just let Chad and Jeremy make all the decisions.

All in all, this was a good story. I just feel it could have been so much more.

You can buy Measured Doses here: