“Heroes are ordinary people who make themselves extraordinary.”― Gerard Way 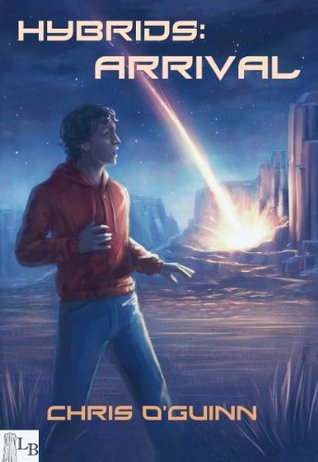 Blurb: The night that Joaquin witnesses the fire in the sky was the last night of anything normal for him. His world of high school and football is completely upended as he comes face to face with an extraterrestrial being.

Thrace, as the alien calls himself, seems friendly enough. However, he has abilities that are far beyond human. And he comes with word that others of his race are already on Earth.

Joaquin’s friendship with Thrace takes him into danger and chaos as he learns the terrible truth of why the aliens have come to Earth. He and his friends must find some way to help Thrace stop his people, or the human race will suffer the consequences.

The only thing that Joaquin now knows for certain is that our world will never be the same.

Review: There’s a reason Chris O’Guinn’s Young Adult novel Fearless made it onto my list of best books of 2013, and it’s not only because he made me cry like a wee baby. One of the things I’ve discovered about his writing, after reading both Fearless and now Hybrids: Arrival, is that Mr. O’Guinn’s books work outside the demographic of Young Adult fiction because his stories’ teen protagonists experience emotions and thoughts that reach out not only to the young audience as familiar, but they touch upon the memories of his adult audience as a reminiscence of how confusing and difficult those years truly were. Their youth doesn’t hinder the reader’s ability to become absorbed in their lives and, in the case of Arrival, it serves to increase the action and adventure of Joaquin’s story.

Joaquin’s life is in a downward spiral when Thrace quite literally comes crashing into his midst, and quickly turns it upside down and inside out too. It seems extraterrestrials have been walking among us, and the author quickly transforms Joaquin and Thrace’s dangerous first encounter into a catch-me-if-you-can chase between a covert international operation bent upon capturing Thrace and punishing Joaquin for harboring an alien fugitive. It seems as though Thrace’s people might not be the benign and peaceable alien race Thrace claims they are, and that’s a dangerous lesson learned for all of humankind.

Bringing Joaquin’s friends Sylvia and Arturo into the fold to help Thrace find his missing father, Chris O’Guinn deftly bands these four characters together as unlikely heroes who must fight against all but impossible odds. There are threats to their safety and betrayal at nearly every turn, and in the end, these friends learn difficult lessons about trust and the painful truth that life is seldom fair or simple.

Hybrids: Arrival isn’t a coming-of-age story or a teen romance. In fact, the sexuality of the characters is a mere fraction of the whole of who they are. Their greater sum is their courage (when the easy thing to do would be to surrender, but the right thing to do is to keep fighting for the greater good), their loyalty and friendship. Thrace is adorable as the ELF (Extraterrestrial Life Form) who’s just trying to fit in like a regular kid but doesn’t always get it exactly right; Joaquin is perfect as the confused and angry boy who wants to lash out at an intangible enemy but instead, sabotages himself when the very foundation of his life crumbles. His true self shines through, though, as his sense of honor begins to define him.

Sylvia is the sassy and fiercely loving best friend, who does her best to ground Joaquin and keep him from going under when his emotional turmoil threatens to get the best of him, and finally, Arturo is the loveable geek alien investigator who’s so used to being bullied he’s at first fearful and suspicious of the former jock Joaquin, and he simply shines in all his nerdiness.

The sci-fi elements of the story are detailed enough to let you know you’re reading a fantasy novel, but aren’t so cumbersome that you’ll feel as if you need a glossary of terms to follow along, which, in short, means I don’t necessarily think you need to be a huge sci-fi fan to love the story itself. Chris O’Guinn has left us hanging in a big way at the end of Hybrids: Arrival, and I, for one, am more than ready to see what further adventures lie in store for this band of teenage heroes.

You can buy Hybrids: Arrival here: