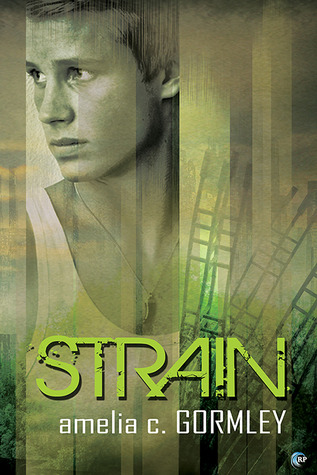 Blurb: In a world with little hope and no rules, the only thing they have to lose is themselves.

Rhys Cooper is a dead man. Cut off from the world since childhood, he’s finally exposed to the lethal virus that wiped out most of the human race. Now his only hope for survival is infection by another strain that might provide immunity. But it’s sexually transmitted, and the degradation he feels at submitting to the entire squad of soldiers that rescued him eclipses any potential for pleasure—except with Darius, the squadron’s respected, capable leader.

Sergeant Darius Murrell has seen too much death and too little humanity. He’s spent a decade putting plague victims out of their misery and escorting survivors to a safe haven he can never enjoy. He’d rather help Rhys live than put him down, so when Rhys can’t reconcile himself to doing what’s necessary to survive, Darius is forced to save Rhys in spite of himself.

But with each passing day, it looks less and less likely that Rhys can be saved. And that means that Darius might soon have to put a bullet in the head of the one person in years who reminds him of what it means to be human.

Review: I cut my reading teeth on Nancy Drew mysteries. Then Stephen King scared me through puberty and young adulthood. I used to devour anything I could find that was scary or unexplainable or gory or just weird. Then when I had kids, I started reading more romance because, quite frankly, it is easier when you’re tired. I need to read like I need to eat, so in order to keep doing that, I modified my reading list. Eventually, hetero romance turned into gay romance. Somewhere along the way, I lost my love of sci-fi, horror and mystery. Thanks to The Walking Dead (television, not graphic novel), I found it again. I’ve started reading more than just contemporary MM romance. If I hadn’t, I would have missed out on Strain. That would have been a very bad thing. Amelia C. Gormley has created a wonderful blend of sci-fi, horror and gay romance. I took a chance on this book, and I loved it until four in the morning.

Strain refers to a virus that has caused the end of the world. We find Rhys Cooper about 10 years after the virus wiped out most of the human race, turning them into flesh-eating monsters. He has been holed up for years in an abandoned monastery with what remains of his family, and a small group of others. The monastery has just been overrun and he is trying to draw the mutants away from his family.

When Rhys is fighting a losing battle, he is rescued by a group of ex-soldiers led by Darius Murrell. Darius has lost a huge part of his humanity since the start of the plague. He has been killing and rescuing survivors in a never ending cycle and seems incapable of real human emotions anymore, but sweet, innocent Rhys stirs something in him that he doesn’t even realize as an emotion. It drives him to try to save Rhys, who has been infected but is not yet showing symptoms of the virus. To do this, Darius and his team must try to infect Rhys with another strain of the virus which they all carry. It is sexually transmissible.

Rhys has know he’s gay, but living at the monastery with a power drunk, right wing pastor for these last years has left him terribly conflicted about his sexuality. His best chance at survival is to have sex with as many of the men in Darius’s squad as often as possible. The exposure has to start immediately to have the best chance of working, and they must continue for up to two months. Rhys quickly decides to go along with it, not realizing how it will mess with his head and heart. If this effort to save him doesn’t work, Darius will be forced to kill Rhys himself to save his squad.

While sex with the men feels dirty and degrading, Rhys feels genuine desire for Darius. He hates that he does, but it’s unavoidable. He is only able to enjoy sex with Darius, the other men leave him crying and feeling traumatized. The sex is quick and rough, only intended to get off, expose Rhys to the virus and get out. With Rhys’s disgust for the act, and, by extension, the team members in evidence, the men begin to not want him. His best chance at survival is multiple partners, so this enrages Darius. He has committed to saving Rhys and doesn’t want to have to kill him. Darius isn’t able to recognize the desire that Rhys has for him and for the pleasure only he can give. Rhys only wants Darius, and not just for sex.

The length of time it takes these two knuckleheads to get it together is almost maddening. Almost. It is actually delicious and tantalizing and hot. Rhys has never been in love, and Darius doesn’t remember how to be in love, so it’s the blind leading the extremely visually impaired. It is almost understandable that they would have such difficulty, as they are traveling miles on foot every day, being attacked and killing and hiding.

It’s a hard call as to which of these men made me feel more deeply. I really loved Rhys’s innocence and vulnerability. He grows into a man who is able to hold his own and speak his mind. It is so gratifying to see him becoming a man experientially instead of just chronologically, while still holding on to his softness and innate kindness. Darius is just plain sexy. He’s a big, bad soldier who does what needs to be done to save what is left of the human race. As Rhys is discovering his ability to be tough, Darius is tapping into his own humanity again. They are both so compelling as they start at opposite ends of the spectrum and travel inexorably toward the middle and each other.

Amelia C. Gormley artfully creates a cast of supporting characters to guide Rhys and Darius in the right direction. Sometimes they provide a gentle nudge, other times a swift kick in the ass. The way the soldiers all come together to protect and care for Rhys helps them find hope themselves. The way Rhys and Darius come together foretells a future for mankind. If these two men can find their way to one another, anything is possible.

I’m so glad I chose to read Strain to rediscover my love of science fiction. I recommend that you infect yourselves immediately.

You can buy Strain here:

One thought on “Amelia C. Gormley’s “Strain” Is An Infectiously Great Read – Reviewed by Tina”