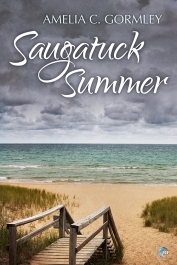 Blurb: One summer can change everything

Hi, I’m Topher Carlisle: twenty-one, pretty, and fabulous. At least, that’s what I keep telling myself. But let’s get real. Walking the fake-it-til-you-make-it road to independence and self-respect isn’t easy. Especially since my mom’s a deadbeat alcoholic, and most of my family expects me to turn out just as worthless. Oh, and I’m close to losing my college swimming scholarship, so let’s add “dropout” to the list.

My BFF has invited me to stay at her beach house on the shore of Lake Michigan. That’ll give me one summer to make money and figure out what I want to do with my life. So of course I decide to have an affair with my BFF’s married, closeted dad. Because that always works out.

Now I’m homeless, friendless, jobless. Worthless. Just like my family expects, right? Except there’s this great guy, Jace, who sees it differently. He’s got it all together in ways I can only dream of—he’s hot, creative, insightful, understanding. He seems to think I don’t give myself enough credit. And if I don’t watch out, I may start to believe him.

Review: I read Saugatuck Summer right after I read Strain from Amelia C. Gormley. I was pleasantly surprised by the polar opposites these stories presented. Strain is for another review, but just so you know; you need to read it. Saugatuck Summer introduces us to Topher Carlisle. Twenty-one years old, Topher is a college student with a swimming scholarship. He works summers to earn enough money to cover his expenses not paid for by his scholarship. His best friend Morgan offers him the opportunity to spend the summer rent-free at her family’s beach house on Lake Michigan. Even though she won’t be there most of the time, Topher jumps at the chance.

The lake house is perfect for Topher. It is rent free, there is a lake right there so he can keep up his busy workout schedule, it is a gay vacation destination, so there should be lots of men to choose from… The one thing Topher didn’t count on was Morgan’s father, Brendan, being so delicious. And married. And straight. And there all summer alone with Topher. But is anyone ever totally straight?

Then there’s Jace. Topher and Jace meet on Topher’s 21st birthday, and the angst wouldn’t be perfect unless Jace was only in town for a short time and living in Chicago. It’s a one night stand with a twist. Extra points for degree of difficulty. The cover of this book looks all peaceful and sweet summer nights making love after a day spent together at the beach. While this would make an okay book, Ms. Gormley does a better job than that by giving the reader an angsty, sweaty, scary, tragic, sexy, love/lust/love(?) story.

Topher winds up homeless, but I’m sure you saw that coming. For a little while, I was really rooting for him and Brendan, but then Brendan does something so epically stupid that even the diehard romantic in me couldn’t be team Brendan any more. Topher fears he may have lost his best and only true friend, as well as his rent-free living situation.

At this point, Topher still hasn’t found a job. But the little pieces of the puzzle that he thought made up his life are coming back together, and they look a lot like something painted one enchanted evening spent with a sexy artist. Then there’s a job. And a sofa, followed by another job in an art gallery. The owner of the gallery recognizes Topher immediately. See, he just returned from a buying trip to Chicago where he bought a series of sexy new paintings from one of the artists he carries at the gallery.

I love me a messed up, starving college boy who needs some love to help him figure his shit out. In Saugatuck Summer, Amelia C. Gormley provides that, in spades. We see a young man in an important and formative part of his young adulthood screw up massively. I cried so hard for Topher. He seemed so lost. It was clear that he had it in himself to fix himself, he just needed to feel like he deserved it. Jace already had his own shit together and made it his mission to show Topher that despite all that he hadn’t had as a child, he deserved love and happiness and a good life now.

The family who had never been there for Topher suddenly needs Topher to be there for them. Thanks to Jace and the new family Topher is building for himself in Saugatuck, he can step up and be the man he’s been afraid to be up until now. Topher doesn’t even need Jace next to him, just knowing he has and returns his love is enough to make Topher be the man he has been told for years that he isn’t capable of being.

This is not a light summer beach read. But hell, your makeup and hair product will already be trashed from the sand/wind/salt trifecta anyway, so why not take Saugatuck Summer along and cry, too? This hurricane of emotion is a category five recommendation.

You can buy Saugatuck Summer here: