Nicole Dennis is with us here today to introduce the first book in her new Southern Charm series from Totally Bound, Rules of the Chef. As part of the RainbowCon Celebration, Nicole would like to give one lucky reader the chance to win an e-copy of the book. Read on to see a yummy excerpt and the registration deadline!

1.) How did you come up with the idea for the Southern Charm series? Are you a southern girl yourself?

A. The book started as a project I tried with a fellow author, Rj Scott. It kept getting stalled thanks to other projects and timetables, so she gave it over to me. *nibbles on nails*
I’m a transplanted southern girl. I grew up in Northern NJ and moved to Florida with my folks.

2.) Does food play a role in the series? Would you consider yourself a foodie?

A. It plays a fairly decent role due to the B&B/Restaurant combo. The characters love to eat and hang out in the kitchen. I’m always adding food scenes in my books.

I’m a careful foodie since I’m on a strict regimen to control my belly illness – IBS. One wrong food and I’m in pain, so I’m always looking at recipes. Guess it influences what I write.

3.) This is a seven book series—do you have it plotted out all the way to the end? Did you find as you were writing “Rules of the Chef” that you had to alter your vision at all as the characters took shape?

A. The 7 book idea came from talking with my editor after turning in the first book. She suggested I pull it out several books and turn it in a series. All of the sudden, a few fellas from the book started yapping in my ear. They’re not plotted, but short synopses and ideas are there for each one.

Oh yes, I’m always altering things as I write. Even going back and filtering in a new line of the story because I figured out something about the character or adding in a new thread.

4.) What common traits would you say all your leading men share? What do you think makes for a great protagonist?

A. I try to keep them all compassionate and understanding of others. Sure they tease and play with one another, but there’s nothing hateful about their friends and loved ones.

A great protagonist is someone who intrigues you and you want to follow their story to the very end. You fall in love with them and want them to jump off the page and visit you in reality.

5.) Will each of the seven books feature a new couple? Will the books be able to be read as standalones, or should they be read in order?

A. Each book does feature a new couple, but due to how I structured the series the other couples are always around. I recommend reading them in order because of the integrated and continuous storylines. Plus the later couples are introduced in the earlier books so you get to know bits and pieces of them in anticipation (I hope) for their story.

A. I’m always working on more ideas than I have time to write. I’m slightly ADD when it comes to that.

Other than the rest of the Southern Charm series, I’m working on two new sets of 5-book serials. One will be about magical bound familiars. The other is about sentinels who watch and protect the seasons.

I have my M/M/F jaguars to continue. 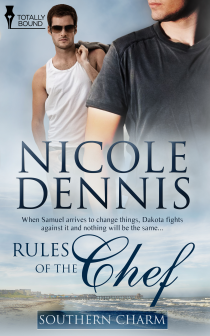 Blurb: When hotelier Samuel Ashford arrives to change things, Southern Charm chef Dakota Mitchell fights against it and nothing will be the same.

Learning about the sale of his beloved home – The Southern Charm, chef and co-owner Dakota Mitchell is having a hard time with the potential changes. He wants nothing else to alter.

Chosen by his family’s company Ashford Hotels to re-create the Charm into the latest chain of boutique hotels, Samuel Ashford enters the Deep South. Inside the overgrown, run down appearance, he learns the Charm is run by people who care and love the building, the delicious food, and their guests.

Can these two put aside differences and arguments to save the Charm? Even if it means they find a little love along the way.

Dakota moved around the back hallway and the stairs to his private suite under the eaves. He needed to get dressed and return to his kitchen. At least he had some control in one part of his home.

I wouldn’t have a home if I lose my share. Shit, I would have to figure out where to create and supply a new restaurant, a place to live, and all kinds of other crap. I don’t need this pressure or stress. What a crock of horse shit! His thoughts were almost as chaotic as a smoke alarm in a quiet room. Shoving a hand through his wet hair, pushing the damp strands off his face, he used the towel to dry his hair at the back.

Climbing the stairs, he stared down at the floor while he rubbed the towel over his nape. On the top floor, Dakota went down the empty hall. He cursed in surprise when he banged into something hard. A body, it seemed, as he saw his bare feet tangled with pricey leather loafers. Feeling their combined mass go off balance, he wrapped his wet arms and towel around the other form, and twisted to take the brunt of the fall. His head rapped hard against the floor and wall after his ass hit the carpet.

“Holy hell!” There was a harsh biting ache in his hip and an answering throb in his skull.

Glancing up, his eyes a little dazed and blurry, he felt more than saw the shorter figure—a man—pressed against him. A noticeable erection ground against his lower belly and it wasn’t his. It sharpened his attention through the haze of pain and caused his cock to take notice. He groaned when their erections bumped together.

Their legs tangled—it had been one hell of a long time since he’d had the heavy weight of a guy pressing him to the floor. Unable to help himself, he breathed in the delicious cologne and soapy scent of the man before he admired the honey-highlighted brunet color of his hair. The weight of a suit and tie brushed against his skin.

“Why can’t you look out where you’re going?” the guy said. “I was clearly on one side, not even in your path.”

Dakota felt like retorting ‘Well, duh, had a freaking towel over my head’, but he didn’t. Instead he offered rational defense, “I didn’t expect anyone up on the staff and owners’ floor. I’m the one on the bottom here. You knocked me over.”

“You tangled our feet together and knocked us off balance. I had no other choice except to go down.”

Dakota forced the smaller man to roll onto the thin carpet and hardwood floor. He moved his aching erection to a different side to relive some pressure. He pressed a hand against the growing knot of pain on the back of his head. “Jeez. This isn’t what I need on top of everything else, a freaking bump and headache.”

“Are you all right?” Guest on the Wrong Floor said.

“I whacked the living hell out of my head. How do you think I am?” Dakota grinned as he looked across at Mr Uptight. “We can only blow out so much cold air to chill people off. You should lose a few layers.”

“I’m not here on vacation. This is a business visit. I’m here to oversee things and was assigned this room when I requested it. The lady at the front desk said this room wasn’t for guests.”

“Business? What kind of business? Florida businessmen are dressed in business casual. No tie required.”

“Should I presume you’re staff?”

“A little more than staff, I’m the chef and owner…co-owner of the Charm. I belong up here. Dakota Mitchell,” Dakota said. “You’re on the wrong floor.”

The man blinked caramel brown eyes. Dakota found an intense interest in the long brown lashes that surrounded them. “Samuel Ashford. I represent the new co-owner and I belong on this floor.”

Dakota scrambled and pushed himself well away from the gorgeous man. He backed against the wall. Sonofabitch, this is my nemesis? The guy who’s going to rip the guts out of the Charm?

“I am. Actually, I arrived a few minutes later than I expected since I couldn’t find…”

“Yeah, anyway, welcome to the Southern Charm.” He rose to his feet, twitched his shorts in place, then went to his room before the man could finish any explanations or issues with his home. At the door, he turned and stared at the slender man. Change a damn thing and I’ll wring your freaking neck. “I’ll get changed and be with you in the foyer in ten.” With that last message, he slammed the door in Samuel’s face. He could hear Samuel’s dry response even through the heavy door.

About the Author: Ever the quiet one growing up, Nicole Dennis often slid away from reality and curled up with a book to slip into the worlds of her favorite authors. Over the years, she’s created a personal library full of novels filled with dragons, fairies, vampires, shapeshifters of all kinds, and romance. Always she returned to romance. Still, there were these characters in her head, worlds wanting to be built on paper, and stories wanting to be told and she began writing them down whether during or after class. She continues to this day. Only recently has it begun to become fruitful, spreading out to let others read and enter her worlds, meet her characters, and see what she sees. No matter what she writes, her stories of romance with their twists of GLBT, paranormal, fantasy, and erotica will always have their Happily Ever Afters.

She currently works in a quiet office in Central Florida, where she also makes her home, and enjoys the down time to slip into her characters and worlds to escape reality from time to time. At home, she becomes human slave to a semi-demonic tortie calico.

In person – I’ll be at RainbowCon in Tampa (with you and all the other wonderful authors). In October, I’ll be at GRL as a Reader, but you can still ‘attack’ me for autographs and info.