“It was more and more difficult to hold on to hope, and yet, all I needed to survive another day was to gaze into Taruif’s eyes and have Ianys’ arms around me.” – Blaine D. Arden 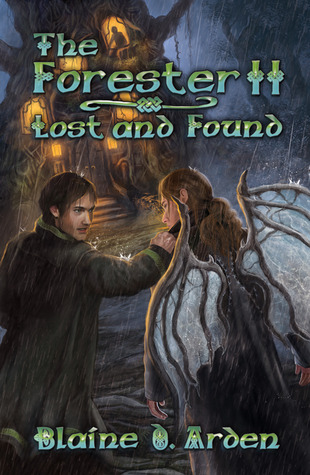 Blurb: “The Guide mentioned puddles, but I envisioned lakes, deep treacherous lakes, and I was drowning.”

One turn has passed, another Solstice is just around the corner, and having an illicit affair with not one but two lovers—smith Ianys and shunned Forester Taruif—is taking its toll on Truth Seeker Kelnaht.

If it isn’t sneaking around to find some quality time with his lovers, it’s heavy rainfall hiding traces of a missing stripling, or waiting for the elders to decide whether or not to set Taruif free.

And if that’s not enough, Kelnaht fears that in gaining one lover, he might be losing another, as Ianys seems to be pulling away from them, and it looks like someone is, once again, trying to frame Taruif.

Review: Years ago, when I was still at Top2Bottom Reviews, I came across a book from a new-to-me author that made me squee with delight. It had everything I love about books—high fantasy to sink my toothy imagination into, an intriguing mystery that kept me guessing until the very end, characters I couldn’t get enough of because their lives were just that complicated…I wanted them to somehow find their happiness, and now, Blaine D. Arden has delivered the second in The Forester Trilogy, and I must say I loved it every bit as much as the first.

The world building in this series is pretty exceptional, not at all heavy-handed or overdone, but detailed to the point of envisioning, while you read, where these elves live, how they live, and the magic that surrounds them. Kelnaht, the Truth Seeker; his lovers Taruif, the Forester who has spent two decades in exile right in the midst of his very own people; and Ianys, the man who’d loved and left Kelnaht but returned after making a vow he couldn’t entirely keep, are back for more murder and mystery in this installment of the series. It seems someone’s been holding a grudge against Taruif, and they mean to make him pay for the crime he’d been exiled for committing. And, once again, the author takes us every step of the way through an investigation that unravels the clues Kelnaht finds to stop a killer before he strikes again—and this time the target is a bit too close to Kel’s heart.

The mystery plays out perfectly against the love story between these three men, who have come to the realization that what they have together is worth clinging to, fighting for, and taking the risks they must take in order to be together. What Blaine D. Arden has done so beautifully is to weave what is an unconventional relationship into not only a believable romance but into a relationship that doesn’t fetishize their ménage a trois but makes us believe the love these men share is deeply rooted in a bond that goes well beyond anything so simple as physical attraction. If you’re a little leery of reading a book with a M/M/M relationship, let me tell you, Lost and Found is one that will make you rethink the idea a threesome can’t, or shouldn’t, work.

That doesn’t mean there aren’t still obstacles ahead, however. Kelnaht has openly claimed one lover; will he ever be able to claim the other? Time will tell, but one thing I’m pretty sure of, there will be another mystery for Kelnaht to solve, and I, for one, am looking forward to solving it with him.

You can buy The Forester II: Lost and Found here: