“Nothing good comes from hiding in the shadows.” ― David A. Broughton 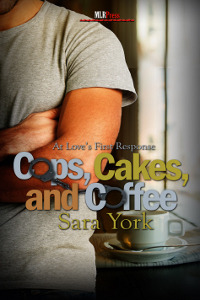 Blurb: After Drake Knowles embarrasses himself in front of Adam Hughes he doesn’t see a way for them to ever be together, but sometimes laughter creates a bigger attraction than seduction.

Drake Knowles hides his sexual identity from his macho cop buddies. He doesn’t plan on stepping one foot outside of the closet but then he meets Adam Hughes and everything he thought about himself is challenged. Adam makes him feel amazing and it’s not just the sex. Adam has been out for ages and doesn’t want to hide who he is, but dating a police officer is different than any other relationship he has ever had. Danger threatens their peace, exposing them to the community and to all of Drake’s friends.

Review: Drake Knowles is a very closeted man. While participating in a departmental sporting event, he loses a bet and while paying up the debt, he meets a man that has him questioning everything he has always believed. You see, Drake has always felt that to be a cop and to have the support of his fellow men in blue, he has to keep his sexuality a deep dark secret.

Adam Hughes is an out and proud business owner who doesn’t have any idea what the inside of a closet might look like. When he meets Drake and finds himself falling for the man, he realizes that to keep the man he might just be finding out all about closets.

These two men are night and day, but they just fit together. Drake begins testing the waters with his co-workers to see how his coming out might be handled. Just as he feared, most people he knows don’t seem quite as receptive as he had hoped. When a dangerous situation comes up it will force Drake to make a choice between his closet and living his life with the man has come to not want to live without.

Sara York has once again done a wonderful job in a short amount of words. It was quick trip from first meeting to falling in love, but they had some pretty big issues to overcome to finalize their story. The internal struggles were well written and rang very true for the life of a police officer.

Drake and Adam both have their ups and downs, but almost from the beginning you can see their potential as a couple, and that makes for an even better ending. I highly recommend this title, and I am looking very forward to the next book in the series also. Check this one out. I believe you won’t be disappointed.

You can buy Cops, Cakes, and Coffee (First Responders: Book One) here: