Vampires are one of my favorite types of heroes in paranormal romance. I love their strength and their exotic beauty. Like every romance hero, the vampire needs to find the person who changes or enhances his life, but what kind of partner works best with him? His choices are a human, a vampire or another type of paranormal creature. Each can be an exciting match.

Depending on the characteristics of the vampire in the story, a vampire/human pairing is usually bittersweet. They might start out as enemies, especially if the human is a vampire hunter, but as they get to know each other, they realize they’re not so different after all. If they are enemies at first, their relationship might cause problems with friends and family who are against their forbidden love. If the vampire is the immortal sort or if he exists for longer than a human lifespan, he will outlive his lover by ages. There is little or no chance of them meeting again in another life, as the vampire is bound to this one. The vampire’s emotions are completely exposed, since he knows that his time with his lover will end in a blink. The human will age while his or her vampire lover remains outwardly young.

A vampire with another vampire is my personal favorite pairing. They share many of the same strengths and in the bedroom they don’t have to hold back for fear of the vampire overwhelming a mortal. Two beautiful vampires ruling the night together is a thrilling combination, although not a perfect one. They might be tempted to fight each other for dominance. The older of the pair might feel superior. If one vampire happens to “change” the other, it might also cause power issues.

When a vampire falls in love with another type of paranormal creature, it can be a thrilling ride. They need to find a way to understand each other and their unique powers. Are their species natural enemies? As in a vampire/human relationship, they might start out trying to destroy each other only to fall in love. Again the struggle for dominance might be an issue. Who is stronger, the vampire or his werewolf mate? Will a vampire’s mind control work on a wraith or a witch?

Every vampire romance has something different, sexy and intriguing to offer. What is your favorite vampire pairing? 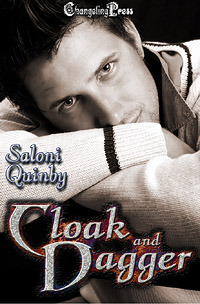 When police detective Bryce Tarunson arrests a man who’s identical to his lover from two thousand years ago, he’s pulled closer to the vampiric master he hates.

Vampire hunter Shane will do anything — including tempt a vampire — to rescue his brother who has fallen into enemy hands. He doesn’t believe he’s capable of falling for the object of his seduction, until he meets Bryce.

The bond between Bryce and Shane forces them into a battle that might end in the destruction of the Weapons of Redemption.

“You look tired,” Bryce said. “Why don’t you get some rest.”

“I said I’d help you find him and I will. My friends have agreed to help.”

“Why are you trusting me? What’s the catch?”

Shane wished he could believe that. He snorted with laughter. “There are no good vampires. Only lesser degrees of evil.”

“You sound like the monster who made me. For two thousand years I’ve fought against that notion. He did everything in his power to convince me and my friends that we’re evil. Torture and loneliness didn’t break us, so the bitter words of a frightened human certainly won’t.”

“Frightened?” Shane curled his lip. “I’m not frightened of vampires.”

“No, but you’re scared of losing your brother and of being left alone, aren’t you?”

Shane drew a sharp breath. How could Bryce know that? He was certain he couldn’t read his mind.

“You really are like Ronan,” Bryce said softly and lifted a hand to caress Shane’s cheek, but he jerked away.

“Ronan was cast out of his clan,” Bryce continued.

“No. I never would have left him, had I not been forced by Tarun. Ronan and I met after he’d been cast out. He was alone for so long and he hated it. He was one of the strongest, most courageous men I ever knew, but he didn’t like being alone.”

“I’ve been alone for years, except for Adrian.” Shane lifted his chin and steeled himself, refusing to show how much Bryce’s words affected him. “After our parents were killed, we swore to watch each other’s backs. We’ve never failed each other, until now.”

“You haven’t failed him, Shane. Believe me when I tell you, if it’s Tarun we’re dealing with, you couldn’t fight him on your own. Now you won’t have to.”

“Why are you helping me? Your friends might be right, you know. I could be lying. Playing you.”

“You’re not.” Bryce slid a hand to the back of Shane’s neck. That simple touch and the look in Bryce’s eyes made him tingle all over.

The Weapons of Redemption series is available at:

The child of a painter and a psychic dreamer, Saloni Quinby feels spirituality and storytelling go hand-in-hand. She loves the scent of gardenia, the sound of wind chimes and the taste of honey. By listening to what isn’t said, she creates works based on unspoken desires. Saloni prefers blurred gender lines and many varieties of romance. In a world where passion must at times be restrained, she believes erotica is a pleasure to be shared. With her stories she would like to make her fantasies yours and hopes you enjoy the ride. She also writes under the name Kate Hill. Please visit her online at Website, Twitter and Facebook.