“Besides, it’s my God-given right as an American to speak my mind and fill others’ ears with my thoughts, my opinions, my innermost feelings, and my repressed childhood memories.” ― Tim Anderson 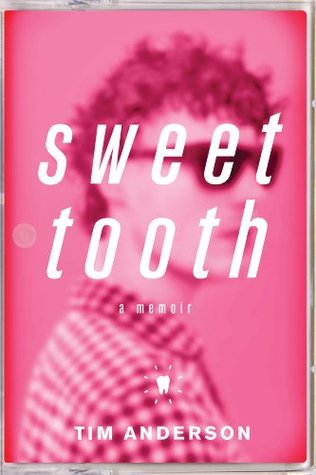 Blurb: What’s a sweets-loving young boy growing up gay in North Carolina in the eighties supposed to think when he’s diagnosed with type 1 diabetes? That God is punishing him, naturally.

Sweet Tooth is Tim Anderson’s uproarious memoir of life after his hormones and blood sugar both went berserk at the age of fifteen. With Morrissey and The Smiths as the soundtrack, Anderson self-deprecatingly recalls love affairs with vests and donuts, first crushes, coming out, and inaugural trips to gay bars. What emerges is the story of a young man trying to build a future that won’t involve crippling loneliness or losing a foot to his disease—and maybe even one that, no matter how unpredictable, can still be pretty sweet.

Review: I wanted to read Sweet Tooth because my sixteen year old son has Type I Diabetes, the same as Tim Anderson. Mr. Anderson (oh no, I’m having Matrix flashbacks!) begins his memoir when he is diagnosed at the age of fifteen. Strangely enough, that was also around the time that Tim discovered that he’s gay. Two major life changes at the same time. Many adults couldn’t handle a one-two punch like that as well as Tim Anderson did as a teenager. Want to know how he got through it? His sense of humor. Tim Anderson is funny and self-deprecating and able to see the humor in almost any situation.

Sweet Tooth takes place in the South in the 1980s. It was the beginning of the AIDS crisis and the height of the Moral Majority’s power. One of the worst times and places to come out as a gay teenager. The music was good, though.

I am a little bit older than Tim Anderson, so many of the musical references were unfamiliar to me, but he depended heavily on the musical influences of the time, almost as much as he did on his sense of humor. There was a song for every occasion and meaning in every lyric. He bonded with friends over musical artists and rejected other potential friends because they had different musical tastes.
Tim was well aware of the life altering side effects of Type I Diabetes (T1D), and they were driven home with terrifying clarity repeatedly in the book. As the mother of a child with T1D, I was alarmed at the way Tim dealt with his health, the carelessness with which he treated his disease. As a citizen of the USA, I was pissed for him when he couldn’t get insurance to cover his diabetic testing supplies. That’s right, think what you may about Obamacare, but at least today men, women and children with T1D don’t have to go without testing supplies and guestimate their insulin dosage. Doing this can cause deadly complications.

Aside from being alarmed and pissed, I was also lifted up. To see how well Tim Anderson dealt with life and love, both in the face of T1D and his burgeoning sexuality, was like a breath of fresh air after this long winter we’ve had. He took chances, but what teenager doesn’t think he is ten feet tall and bulletproof? He made stupid mistakes, but which of us hasn’t? The bottom line is that he took what at that time in history were two strikes against him, and he hit a homerun. The treatment of T1D has made major strides in the last thirty years. I don’t have to tell any of you how far the gay equality movement has come in that same time.

I was rooting for Tim the whole time. Watching him come out slowly, to one person at a time, and seeing it get easier each time he said the words “I’m gay,” gives credence to the It Gets Better motto. I hoped he would get his health under control and keep it that way. I hoped he would find true love and have his happily-ever-after. There is a sequel to Sweet Tooth, so I guess I can go find out how he did it!

You can buy Sweet Tooth here: