“That was my first instinct — to protect him.” – Graham Greene 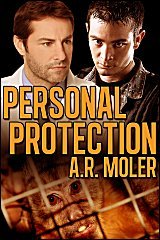 Blurb: Dr. Ryan Bergstrom has offended somebody, but he has no idea who is so upset with him. Ryan is a gifted medical researcher working on a drug that could slow down the progression of Alzheimer’s disease. Death threats and nasty pranks mean that the medical research firm has hired a bodyguard to make sure their golden boy is protected from his stalker.

Brendan Marek is an ex-Ranger currently working as private security. Ryan’s attracted to his new bodyguard but sure that a military guy wouldn’t be interested. But Marek is not a stereotype. Can they figure each other out while under siege?

I love reading about tough, alpha male, ex-military, no-nonsense bodyguards protecting a sexy scientist, actor or witness. This formula is pretty standard, with the inevitable happening: crazy sexual tension and then the bodyguard falling for his charge.

Ryan is a scientist working on an Alzheimer’s drug, and his work has brought out the crazies and death threats. In walks Brendan, who has been hired to protect Ryan from a crazed stalker. Brendan is the strong and sexy type, and Ryan is smitten. To make a long story short, but in this case short because it’s a short story, Brendan and Ryan give in to their mutual attraction. From their first encounter, they realize that it’s not just sex but a deeper connection that they both want. The sex was good, but in this case more would have been better. And with regards to the whole book, I think the story could have been fleshed out more.

The stalker gets taken down and the story ends on a high note. As I mentioned earlier, I would have liked this book to be longer, but it was very well written. The story is told from Ryan’s POV, and I enjoyed the fact that I was in his head lusting after Brendan.

Personal Protection is a solid short story that may not hold many surprises, but was hot, entertaining, and will leave you wanting more. I did.

You can buy Personal Protection here: