“Is there a voyeur inside you? Or are you the one who would like an audience in the bedroom?” — Cara Dee 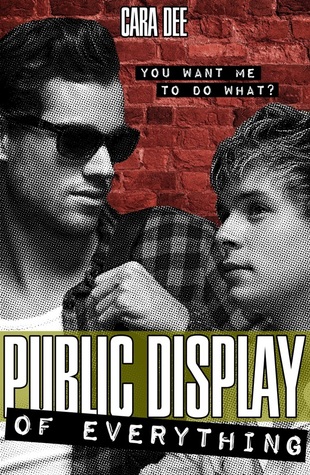 Title: Public Display of Everything

Blurb: “Is there a voyeur inside you? Or are you the one who would like an audience in the bedroom?”

Cory can’t keep a job. Flynn has a job he can no longer hide behind. A simple proposition in an effort to solve both of their problems leads two young men to confront the heartbreaks of their pasts in order to make a future together.

What starts as an innocent bit of voyeurism turns into a public display of…everything.

Review: This was a surprising little read. I hadn’t read any Cara Dee before, but was hearing great things about this book. I am so glad I decided to read it. I can’t wait to read more from her.

Cory is a total klutz. He can’t keep a job because he is always dropping, falling into, over or on top of things, and breaking them. Flynn has a great job as the webmaster of an interactive adult entertainment website. It’s all about public displays. Of anything.

The site is for adults who like to watch or be watched having sex. Sometimes in the privacy of their homes, sometimes in a public place. When a member wants to put on a live show, they post the location, day and time on the message board. Then other members show up and hide so they can watch. Many times, one or more of the watchers records the performance and posts it on the website for those who couldn’t attend live. Sometimes, they even stream it live as they are watching it. There have been repeated requests for Flynn to put in a public appearance, as no one has ever seen him.

Flynn and Cory frequent the same bar and often notice each other there. Neither has approached the other for different reasons. On this day, however, Flynn hears Cory complaining to a friend that he has lost his job again. What neither Flynn nor Cory’s friend know is that he has also been evicted and is carrying his worldly possessions in his duffel bag.

Flynn approaches Cory with a unique business opportunity. He wants Cory to be him. Well, the public him anyway. Flynn doesn’t have the confidence in his appearance to put on a public display. He thinks the gorgeous Cory would fit the bill nicely. He wouldn’t even have to show his face. He could do a solo performance in a window with his face covered. The money is too good to refuse.

A friendship based on mutual attraction and shared insecurities and losses develops between the two men. They each take a closer look at their pasts and how they really feel about them. They encourage each other to overcome their insecurities, growing closer and developing less than platonic feelings along the way.

The Public Display of Everything doesn’t refer to what I, and I’m sure you, initially thought. Well, it kind of does, but it actually describes the willingness of the main characters to put their feelings on public display, not necessarily their sex life. This is a sweet, funny romantic story. The sex is hot, too! I’m proud to publicly display my recommendation of this book.

You can buy Public Display of Everything here: