LOVERS OF MEN IN SUITS AND

ANYONE WITH LAWYER FANTASIES

ON SEPTEMBER 18, 2013, an explosion of light burst through a conference room at Acosta, Bradford & Chadwick, LLP, a top tier law firm located near Columbus Circle in Manhattan. It took place during the monthly meeting between the Family Law Department attorneys and the Managing Partners. Thirty-five people were in attendance, but only one soul was affected.

There are no witness statements as to how it originated other than that of the victim, a thirty-two year-old senior associate. Mr. Derrick Swain, Esq., testified under oath the meeting had concluded when he approached one of the partners of the firm. The partner, identified herein as Roman Bradford, Esq., shook Mr. Swain’s hand, and flashed a smile so wide and tempting, it blinded Mr. Swain and caused him heart palpitations and labored breathing. Mr. Bradford then proceeded to disclose the location where he would be having his lunch, and insinuated to Mr. Swain to stop by The Pond in Central Park. After that first time, both Mr. Swain and Mr. Bradford willingly and readily continued to have lunch together for the next seven days, until Mr. Bradford withdrew his offer of happily ever after without discussing the terms.

THE VICTIM has since suffered from acute insomnia; a broken heart; and the inability to show romantic interest in other men. A closer examination of Mr. Bradford’s actions indicates he was never purposely negligent in the way in which he bestowed his interest and attentions.

THEREFORE, Mr. Swain seeks to punish Mr. Bradford with all the force of his wit, charm, good looks, and seduction until Mr. Bradford admits to the real reasons of his abandonment of Mr. Swain and accepts the plea bargain that includes good times, kisses, domesticity, and a sentence of twenty-five years to life in the company of his former victim.

Author for the Amazing Reader

Hi, all! Thank you so much for stopping by and helping me kick off the blog tour for my first release in nine months.

Hearsay is Book 1 in a trilogy featuring Derrick Swain and Roman Bradford, and pretty much the beginning of their journey towards happiness.

As the title suggests, rumors run rampant in this installment. Acosta, Bradford & Chadwick, LLP has a rather active grave vine, and gossip is a sport. But they are all not fun. Get your copy on May 12th and find out how rumors threaten to destroy Derrick’s life, and whether he’ll be able to deal with the reason that took the love of his life away.

In the meantime, share the craziest gossip you’ve heard but turned out not to be true in the comments section for a chance to win a copy of Hearsay and a title from my back list. 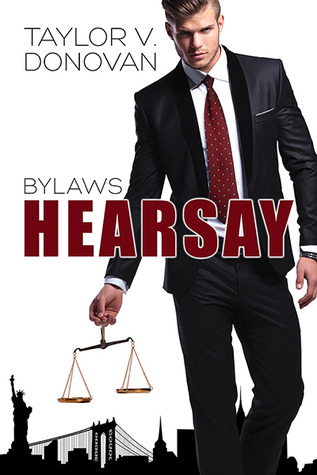 BLURB: Senior associate attorney Derrick Swain wants it all: a loving husband, a fulfilling career, and a couple of kids. After years of hard work he’s on the fast track to a promotion. He’s also met the man of his dreams. A week of daily lunch meetings in Central Park provides the perfect setting to get to know him better, and Derrick thinks it won’t be long before they take the next step and go on a date. But instead of asking him out, the object of his affection stops showing up without explanation, leaving him to wonder what went wrong.

As part owner of one of the most prestigious law firms in New York City, Roman Bradford knows that professional success isn’t the be all end all. Although he’s been lucky in life, true love has eluded him for the most part. One too many failed relationships have caused him to be leery of trying again, until he meets a man that can only be described as temptation personified. A few conversations is all it takes for Roman to start believing things will be different this time around. It doesn’t matter that they are boss and employee, or that he’s feeling too much, too fast. Not when he can see the same emotions in Derrick’s eyes. Then life turns on a dime, and Roman has no option but to let his chance at happiness go.

A battle of wills ensues when a life-altering case brings them together a year later. Roman wants to do the right thing by not letting anything happen between them, and Derrick is determined to prove they’re meant to be together. Evidence will be presented and final arguments will be made. Will they be able to come to an agreement, or will they opt to have their potential relationship dismissed?

40 thoughts on “It’s Not Hearsay – Taylor V. Donovan’s Here With A Giveaway”