“I am not a saint, unless you think of a saint as a sinner who keeps on trying.” ― Nelson Mandela 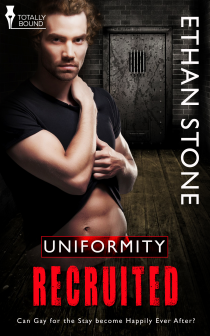 Blurb: Inmate Dylan Hoss never thought he’d fall for a man in prison. He also didn’t think life on the outside would be more dangerous than inside.

Dylan Hoss enjoys sex with men inside prison walls and finds a willing partner in his new cellmate, Joey Campbell. Dylan is confused when he develops actual feelings for him and is devastated when Joey disappears from his life. Dylan is given new hope thanks to an early release.

He’s gets a job working for wealthy—and gay—environmentalist Keegan Malloy. While dealing with his newly discovered sexuality, a burgeoning attraction to Keegan and several family issues, Dylan is recruited for an FBI investigation into a series of environmentally based bombings. The eco-terrorism case turns even more dangerous when Dylan’s sister is harmed, and he vows to do whatever it takes to expose and bring down the bomber—even if it costs him his life.

Review: When I received this book for review, I was completely giddy with anticipation to read it. After meeting Dylan Hoss in the previous books, I was so excited to find out that he was getting his very own story. When he helped out a guard in a big way in the previous book, I knew Dylan had to be a good guy.

Dylan has been in prison long enough to have settled into the routine. He has his possessions, he has the respect of most of the guards and inmates, and he is marking time until he can return to his family on the outside. Though he had never been with a man before he was locked up, the lack of available females in prison has Dylan resorting to what most straight men do while incarcerated. “Gay for the stay” is how Dylan has been making do, although he was never the one on his knees, and he had never had anal sex. He was satisfied with the oral he received from a few of his cellies.

This changed when Joey Campbell was assigned to share Dylan’s cell. This young, naïve, beautiful man caused Dylan to want more and he was totally confused. The two men started a relationship, or as much of one as they could have in prison. Dylan was feeling things he had never felt for another person in his life. When Joey and Dylan are moved to a lower security area and start working, Dylan comes into contact with the Aryan Warriors again, and he is put into danger. Joey finds himself in the position to save Dylan’s life, and he takes the opportunity even though it would mean they would no longer be living together.

Following the conclusion of the situation with the Aryan Warriors, Dylan is granted the gift of an early parole hearing and eventually, is released. Though he was heartbroken by Joey’s, Dylan embraced his freedom and reconnected with his family. With a brand new job and a new love interest, he is flying high right up until the FBI strolls into his life and turns everything upside down. The FBI brings with them a man from Dylan’s past and innuendo about the current man in his life.

While helping with their investigation not only was Dylan in danger, but his family was physically affected, and this pushed him to get to the bottom of the situation to save the people he loves. With an unexpected blast from the past coming back into the picture, Dylan finds himself with even more to fight for.

Ethan Stone has once again taken us on a guided tour of the correctional system and even farther beyond to the adjustment period some ex-cons struggle with once they are out. Dylan was an all around good guy who found himself in a bad situation that landed him in jail. He made the decision to keep his head down, do his time and eventually rebuild his life. It was wonderful to get to see him do this, and even more, throughout this story. He was able to rejoin his family, find work and even learn to accept his own new truth about his sexuality.

Sometimes there are people who just need a break to find the future they deserve, and Dylan was definitely that person. Ethan Stone wrote a fast-paced thriller with a well earned romance, perfectly. I was on the edge of my seat by the time we find out who dunnit, and I have to say that Mr. Stone got me with this ending. I didn’t see it coming, and I LOVE when that happens.

I would highly recommend this book, and I would recommend reading the previous two books since they do give some examples of Dylan’s personality, and I loved both of those books as well.

You can buy Recruited (Uniformity #3) here: