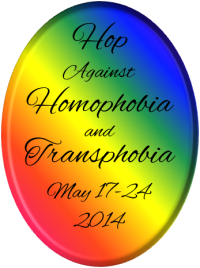 The Novel Approach is proud to once again be participating in the Hop Against Homophobia and Transphobia today, the International Day Against Homophobia and Transphobia. The mission of this annual blog tour throughout the LGBT writing community is a fairly simple one: “To spread awareness of homophobic, biphobic and transphobic discrimination by expressing ourselves and getting readers from within our own genres involved. Furthermore, we are here to stand together as an LGBTQ writer community against discrimination of our books.” Through a global outreach of nearly one-hundred-eighty participating authors, publishers and bloggers, HAHAT has become a positive voice in a virtual world.

We’ll be hosting several guest posts throughout the duration of the tour, from Kade Boehme, Jaime Samms, and including today’s from my friend B. Addler, who has some personal experience with biphobia.

Thanks very much for following along!

Bisexuals: Raising Awareness and Educating on the Challenges and Prejudices

There’s a certain irony that some gay folks are prejudiced against bisexuals. I have a feeling that it’s a perfectly normal reaction. There’s a sort of mentality among some transsexuals that cisfolk are all privileged and inherently cannot understand trans problems, which creates a polarizing effect. With plain ol’ homosexuals, it’s a lot less venomous, but there’s still a polarized lens. There are gays and allies versus the haters. It’s not necessarily a bad thing. Politically, it is like that. But I question whether it really has to be like that in personal life.

That kind of polarization is especially difficult for bisexuals. They aren’t gay and they aren’t allies, exactly. They’re part straight and part gay. You see that? Bisexuals don’t get their own category. The definition is that they’re neither one and a bit of both. A bisexual is attracted to both sexes (and possibly anything in between). This middle ground isn’t vague. It isn’t ephemeral. It’s a firm statement of both. So why are people so unsettled by bisexuals?

There seems to be an anxiety among couples where one is gay and the other is bisexual, or when one is straight and the other is bi. It makes sense, actually. As a bisexual, I can understand why they would be concerned. In any long term relationship, a bi individual doesn’t have all their desires fulfilled. Although, in a LTR, does anyone get 100% satisfaction? But internalized fears and doubts don’t really respond all that well to logic. Is it any more likely that a bisexual person will cheat? I seriously doubt it.

I believe it’s more difficult for a bisexual person to come out, because why bother mentioning bisexuality if you’re married and in what seems to be a perfectly normal het marriage? Personally, that makes it difficult to mention it. Like, with normal, plain ol’ gay folks, it’s hard to have a relationship without letting people know. But a bisexual person can ‘pass’ easier, yet that puts a strain on things because the longer you go without telling people, the longer people get used to thinking of you as just another bland straight person. I think if I told everyone I know they would feel a little betrayed that they didn’t really get to know such an important part about me. Each little instance of homophobia makes me recoil from coming out bi, yet the longer I wait, the more of a shock/outrage I’ll dredge up.

Then there’s the other side of the equation, the bisexual in a same sex relationship. They’re viewed as gay, which is completely unfair. It’s like the average person simply cannot understand that somebody can like apples and oranges. Well, guess what? Apples are tasty and oranges are delicious. Not everybody likes both, but that doesn’t mean that some people can’t like both. Instead, the bisexual in a same-sex relationship is just gay. You’re not eating the apple at the moment, so you must not like it enough. Therefore, you’re gay and just “claiming” to be bisexual to protect a fragile sense of self. Obviously, this is a bullshit line of reasoning, flawed from the start.

Consider: somebody denying another person’s stated identity, as in, you can’t be that way, you’re lying to yourself. That’s nearly as offensive as calling homosexuality a sin (not quite, though). Bisexuality is not self-denial. When somebody identifies as something, nobody gets to question that. You cannot deny an identity. That’s just plain wrong.

Bisexuals get a lot of the same hate as gays, but also can blend in a little easier, which creates resentment from both sides—Secret gays, waiting, lurking. How fucked up is that? What other group gets hate from homo and hetero alike?

Like I said, there’s a certain irony to it. After all the gay community has gone through, and now some members want to subject bisexuals to the same kind of attacks? Fortunately, the hate seems to come from a minority on either side. While there is prejudice against bisexuals, in large portions of the world tolerance and acceptance are the order of the day. The challenges will lessen, just as they have with gays, and hopefully someday, gay or straight or bi will just be another small notation in the greater identity of a person.

About the Author: B. Addler has a weakness for writing erotica shorts in genres varying from crime drama to sci-fi and beyond. Addler believes in solid characters with realistic interactions. There shouldn’t be a “what the hell, why did they do that” moment. While the setting can be strange or distant, people should remain people.

When not writing, B. Addler maintains a very NSFW crossdressing fashion blog (with erotica mixed in) here.

The Giveaway: THIS GIVEAWAY IS NOW CLOSED